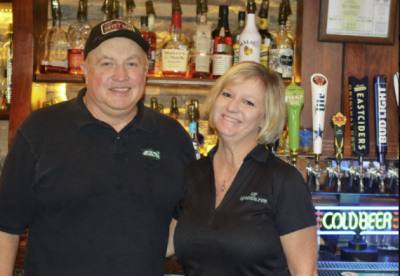 Bill Greer and Stacy Mercer stand in front of their taps at LT Corner Pub in Lakeway. Since November 2016, Lakeway residents have been having a good “craic” (pronounced “crack”)—a Gaelic word for a fun time—at LT Corner Pub, the only Irish pub in the area, its owners said.

“LT Corner Pub provides a great variety of food and drinks in a warm and friendly sports pub atmosphere,” co-owner Stacy Mercer said. “We have a wonderful mix of appetizers and meals that bring the great taste of Ireland into Lakeway.”

Mercer said business in its first year has “overall been good” at LT Corner Pub, whose slogan is “Food, drinks, friends.”

“[We serve patrons] who are looking for a clean, pub-type atmosphere somewhere between a dive bar or honky-tonk atmosphere and that of an upscale restaurant/bar,” he said.

Located in the Lakeway Plaza shopping center at 1310 S. RM 620, LT Corner Pub offers a variety of Irish food items as well as sports bar fare, such as wings and nachos.

Mercer said the most popular item on the menu is the Reuben sandwich. Traditional Irish dishes, such as shepherd’s pie and Irish stew, are also favorites, she said.

“We also have a really good beer cheese queso that we make with Killian’s Irish beer,” Mercer said.
Live music is held most Saturday nights—usually a ’60s, ’70s or ’80s music cover band—and karaoke is held Wednesdays and Fridays.

“There may be half a dozen people or as many as 10 or 12 show up and just get around the table with their instruments—the fiddle, Celtic drum, flute,” he said.

Games at the pub include pool, darts, shuffleboard and the golf arcade game “Golden Tee.”

Greer said an outdoor seating area is scheduled for completion in early 2018.

“We’ll have a western view of the hills and allow for an outdoor smoking area,” he said.
SHARE THIS STORY