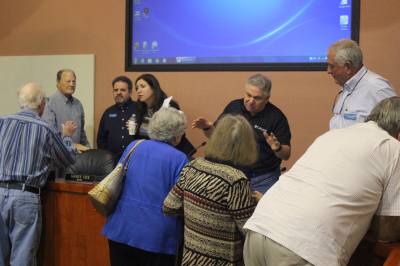 The city of Lakeway is inching closer to a final option on a mixed-use development with a speckled history.

What was last year called the City Center, a proposed development that was ultimately scrapped due to lack of public support, has been revamped into a multiuse development called The Square on Lohmans. Lakeway officials have held discussions with developer Bill Hayes of Legend Communities for several months regarding a number of iterations of the new project.

Information from the city of Lakeway states Legend Communities holds the option to purchase approximately 60 acres of land from the Lakeway Municipal Utility District for future development at the intersection of Lohmans Crossing Road and Lohmans Spur just west of the new Lakeway police station.

A presentation from Hayes took place in February, which built upon changes made since his previous presentation in December and included the addition of some traffic-calming measures within the development; an increase in commercial space—including office, retail and dining—from 85,000 square feet to about 102,000 square feet; and a reduction of residences from more than 250 to 239.

After that meeting, Lakeway Mayor Sandy Cox stressed what Hayes presented to council Feb. 4 was simply another version of the development, not a concrete proposal.

“As [Hayes is] getting feedback, he’s making changes, and so I think it’s an opportunity for the community to see us having the conversation with him,” Cox said. “When they start to see [The Square on Lohmans] going out to town halls, they can see how it’s been reflected, and then when it comes through the rest of the process, they can follow it the whole way.”

The time for the town halls has come. The meetings will be held June 5 from 6:30 to 7:30 p.m. and June 11 from 2 to 3 p.m., according to a press release from Building & Development Services Director Charlotte Hodges. Both will be at the Lakeway Activity Center, located at 105 Cross Creek, Lakeway.

"The purpose of these meetings is to present two options and seek public comment," the release reads. "For more information, please visit the city website at www.lakeway-tx.gov/1636/lmud-property."
SHARE THIS STORY

Lake Travis ISD opened a community survey focused on how to best use this federal funding in its COVID recovery.