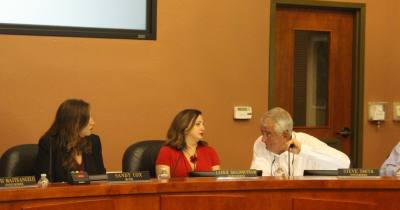 Lakeway City Council passed a series of motions pertaining to the Lakeway Highlands development during the May 20 meeting.

A tract of about 33 acres of land, known as the Lakeway Highlands development, located near the Crosswind Drive and Hornsby Lane intersection was the focus of several agenda items at the May 20 Lakeway City Council meeting.

The items centered on annexation, rezoning and final plat approval for the land owned by RH Lakeway Development Ltd., all of which were approved by Lakeway’s Zoning and Planning Commission and moved to City Council for approval May 20.

But prior to approval of those three proposals, council first passed an eighth amendment to the Lakeway Highlands development agreement dating back to December 1997. ZAPCO recommended council memorialize, or put on official record, commitments made by developers regarding the development of Lakeway Highlands Phase 3, Section 6B.

The amendment also stipulates construction traffic may not access the development from Crosswind and Hornsby, “except as needed to develop connections to those streets from the streets within Lakeway Highlands Ph.3, Sec. 6B.”

Following approval of the amendment and in a succession of three motions, council voted to annex the 33 acres of land, zone it single-family residential and approve the development’s final plat.

Miguel Suazo, managing partner of the Suazo Legal Group, represents two clients living on Hornsby, which he said is technically in Spicewood but abuts the Lakeway Highlands Phase 3 development.

Suazo attended the May 20 meeting and protested several decisions from council to move forward with the development. Among many issues, he said his clients would like clarification on commitments made by the developers through the most recent amendment to the development agreement.

The commitments are likely to be adhered to by the developer, but once the developer sells the land, it is not clear who is bound to those commitments, so unless the city grandfathers them in to the new landowners, there is no guarantee they will stick, Suazo said. Another issue for Suazo's clients involves maintaining a natural buffer zone between them and the new development, which includes determining where property lines are and whether predetermined easements between the two areas are still in effect.

"The problem is we don't really know what our paths for relief are based upon the way the city code is structured, especially in light of the fact that the agreement is between the city and the developer," Suazo said. "So it's really tough to understand what your rights are. And as this community grows and expands, I think some of that clarity is needed."

Assistant City Manager Julie Oakley said the next step in advancing the project is for Lakeway Highlands Phase 3 developer Legend Communities to submit its site-development plan to the city.
SHARE THIS STORY