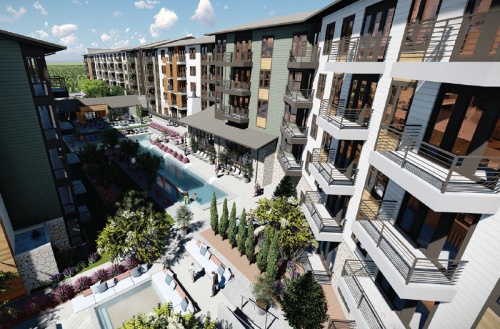 With one new senior living facility about to open and another under construction, Lakeway continues to draw older residents.

The inaugural Belmont Village Lakeway tenants will move in to their new homes the first week of August and a grand opening celebration will be held June 23 and 24.

“Of all the people that have inquired with us, what we are noticing is that more than anything it’s adult children between 45 and 65 who are wanting to move their parents closer to them,” Community Relations Director Christy Christine said. “Back in the day Lakeway was a huge retirement area, but now it’s slowly grown to families coming in for the quieter, simple  pace and great schools.”

Christine said although families are moving to the area and urging their parents to join them, many longtime residents are now seniors who want to downsize and have meals prepared for them.

“We recognize that’s a huge need here, too,” she said. “Our number one kind of resident is someone from [The Village of] The Hills wanting to move into something smaller.”

Staff is expecting to see the assisted-living and memory care units fill later in June and July, as those usually sell to people who have more immediate needs, Christine said.

There are 55 assisted living units, 27 memory care units and 27 circle of friends units, which are part of a mild to moderate memory program and are not secured. There is also a Belmont Village West Lake Hills, which opened in 2014.

Construction on Serene Hills, a planned senior-living community that will have between 135 and 160 units, is projected to begin at the start of 2019, developer Chase Courchaine said.

Tuscan Village currently has one of three buildings for residents complete, with 32 people already moved in and the same number of units planned for each additional building.

The second building is currently under construction, and work on the third is expected to begin by the end of this year, said Bill Hayes, chief operating officer of Legend Communities.

Legend Communities is working on an additional project on the other side of Lohmans Crossing Road behind the new Lakeway police station.

Attiva Lakeway will be an age-55-and-up luxury community with 210 units.

The rental apartments do not have a set price yet but will be “higher end,” Hayes said.

Construction is expected to start in late summer of this year.
SHARE THIS STORY