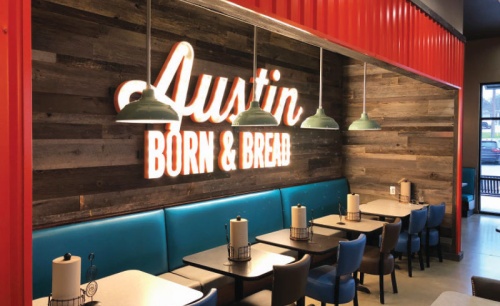 The interior design for the Eatery has an Austin flair.

Schlotzsky’s Austin Eatery, located at 3944 RM 620 in the Park at Bee Cave plaza, opened in March with a new look and menu inspired by Austin’s food truck scene.

Schlotzsky’s was first established in 1971 on South Congress Avenue in Austin, serving a single sandwich item.

Owners Cary and Jackie Albert have been in the franchising business since 1994 and operate about 30 Schlotzsky’s restaurants in the Dallas and Central Texas area. Jackie said Schlotzsky’s Austin Eatery was created to resemble the uniqueness of Austin.

“The thought was to bring our traditional favorites and new food truck items to our menu with a hip look like you see in Austin,” she said. “Bee Cave is a great neighborhood town. I love seeing customers come into the store and give other customers a huge hug. We’re like one big family.”

“Anytime you bring something that’s well-known like Schlotzsky’s from Austin to other places, it’s going to do pretty well,” Gramlich said. “Everyone seems to like the new look of Schlotzsky’s, especially the new menu items.”

Kallie Bergh, a 19-year-old customer, said she has been eating at Schlotzsky’s with her family for many years but enjoys the new Austin concept even more because of its fresh and open feel.

The restaurant’s interior decor includes pictures of the capital, the Congress Ave. bat bridge and music components that all pertain to Austin. Another new aspect at this location is the live music Thursday evenings and beer on tap.