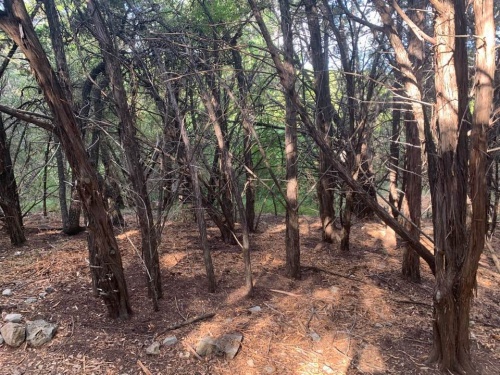 Lakeway City Council announced Oct. 21 the city of Lakeway has partnered with the Cavaliers chapter of the Young Men's Service League to help clean up the Hamilton Greenbelt, pictured here.

Thanks to a major volunteer deal brokered between the city and a student group from the Lake Travis area, Lakeway's Hamilton Greenbelt will soon have much more help in the effort to reduce wildfire risk.

During the Oct. 21 City Council meeting, Council Member Laurie Higginbotham announced that the city of Lakeway has partnered with the Cavaliers chapter of the Young Men's Service League.

Higginbotham said the group, which was formed in 2015 and draws the majority of its members from Lake Travis High School students and their mothers, has made helping with the wildfire prevention effort in Lakeway's Hamilton Greenbelt its main project for this school year.

"They've committed 200 volunteers to do a minimum of two hours each, and they're going to be putting in 400 hours of volunteer work," Higginbotham said. "That's going to be worth tens of thousands of dollars to the city. So we are very appreciative of that."

Higginbotham said the service league will start with four service days in November and then add to that as needed.

The wildfire prevention effort in Lakeway has has proven a topic of major import for the city in recent months.

As part of the fiscal year 2019-20 Lakeway budget, City Council made a $350,000 transfer to the city’s wildfire mitigation capital fund.

The Hamilton Greenbelt is one of the first areas that will be cleaned up as part of the effort. Information from the Texas Wildfire Risk Assessment Portal shows that area to be at “high to very high” risk of wildfire.