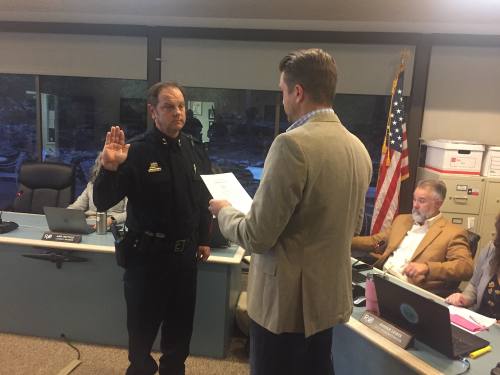 The city of Rollingwood has sworn in as its new police chief former Corpus Christi Police Captain Jason Brady.

The city of Rollingwood has sworn in as its new police chief former Corpus Christi Police Captain Jason Brady during the Oct. 16 City Council meeting.

Brady’s official start date was Oct. 1, and he comes to the city on the heels of interim Chief Kristal Pompa, who ran the Rollingwood Police Department for a year after former Chief Max Westbrook resigned in September 2018.

"In the two weeks I've already been serving in this capacity, I just want to reiterate we have an incredible department," Brady said. "I'm honored to have been chosen."

Brady had served as captain for the Corpus Christi Police Department since 2010. Prior to that, he rose in the ranks within CCPD, starting as an officer in 1993 before becoming a sergeant and then a lieutenant.

Council also presented Pompa with an award of appreciation for excellent service during her tenure as interim chief for the Rollingwood Police Department.

"We had some shortages for a while, ... and we would be remiss not to recognize the efforts ... of interim chief Pompa," Mayor Michael Dyson said. "On behalf of our entire community, I just want to say thank you. You really delivered."