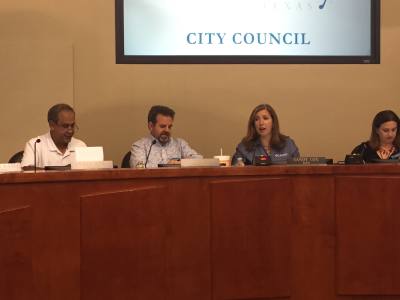 As part of its ongoing wildfire prevention effort, Lakeway City Council allocated $350,000 to its wildfire mitigation fund during a Sept. 30 special meeting.

Wildfire prevention has proven a topic of major import for Lakeway over the last several months, and a couple of actions from City Council have continued to bolster the city's ongoing preemptive efforts.

During discussion of its consent agenda at a Sept. 30 special meeting, council updated language in its interlocal agreement with Lake Travis Fire Rescue in order "to actively and preemptively take action to aid in the prevention and mitigation of the increasing risks of wildfire within the city," according to city documents.

"We've always had an interlocal agreement with LTFR to provide these services," Mayor Sandy Cox said. "It just happens to be a coincidence in time that we're just updating the language that was in it and the rate and so forth."

On top of the update to the language in the annual interlocal agreement, as part of the fiscal year 2019-20 Lakeway budget, City Council has made a $350,000 transfer to the city's wildfire mitigation capital fund. Relevant funds came from the public safety bond fund which held leftover monies from Lakeway's brand new, $23-million police department building. That funding transfer was part of council's unanimous adoption of its FY 2019-20 budget during the Sept. 30 meeting.

Cox said that while the updated interlocal agreement and the $350,000 budget allocation are essentially separate actions taken by the city, they do go hand-in-hand with regard to the ongoing wildfire prevention effort.

"This was a really important issue with this council this budget cycle," Cox said. "One of our greatest assets is our parks. We wanted to protect our parks and the homes around our parks. And so we made a very bold move to fund the project in order to make sure we can make our community as fire-wise as possible."

City staff began working on the particulars of the $350,000 allocation following a Sept. 9 budget workshop. During that meeting, Lakeway City Forester Carrie Burns and Chris Rae, Lake Travis Fire Rescue’s wildfire mitigation expert, made the case for the prevention effort and the costs associated with it.

Information in the updated interlocal agreement quotes a daily rate for LTFR's services at $2,100 for complete fuel reduction services, including labor, chainsaws and a chipper as well as a specific allocation of $1,700 to chip or remove old, dead and downed woody materials where directed.

"The daily rates ... are based on 8-10 crew members working for eight hours each day," the agreement states.

The Hamilton Greenbelt is one of the first areas that will be cleaned up as part of the effort. Information from the Texas Wildfire Risk Assessment Portal shows that area to be at “high to very high” risk of wildfire.

Given these classifications, large flames ranging from 30 feet to 150 feet in length are possible, as are strong, fire-induced winds, Burns said.

City documents list the six highest priority tracts for risk reduction as the Hamilton Greenbelt, North Lakeway Village, Sailfish Park, City Park, Rebel Park and the Hurst Creek Road Greenbelt, all of which combine for 208 acres, with the whole of Hamilton, at 94 acres, accounting for almost half.
SHARE THIS STORY