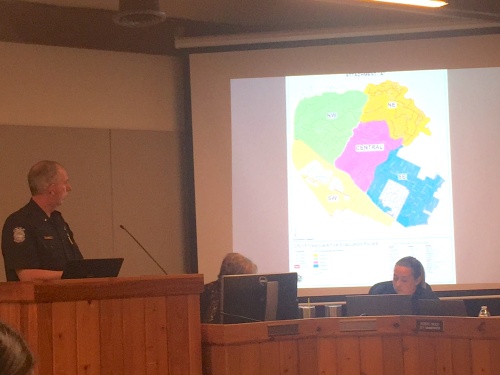 Back in 2011, when wildfires raged through certain parts of Central Texas, evacuation routes out of neighborhoods were on everyone’s mind, according to West Lake Hills Mayor Linda Anthony.

During the June 12 City Council meeting, Anthony said it is time to start updating evacuation plans in her city. West Lake Hills Police Chief Scott Gerdes then discussed fire evacuation routes and other emergency options for the city.

As of June 2019, Gerdes has updated the city's evacuation plan with the help of the West Lake Fire Department and input from Eanes ISD, and said those updates should soon be available on the West Lake Hills website. Now, Gerdes said, it's time to ramp up resident involvement.

“One of the big problems we have … probably 60%-70% of the streets in West Lake Hills have one way in and one way out,” said Gerdes, adding the city's narrow streets can also pose a problem.

Coupled with the heavily forested nature of the city, narrow streets with limited entrance and exit capacity pose numerous threats in the event of a fire, Gerdes said. Residents need to explore alternatives to exiting their streets, especially with single-lane roadways that could easily be blocked, he said.

Anthony agreed it is important to begin and continue a citywide conversation centered on situational awareness.

Gerdes said community involvement that incorporates first responders, such as a neighborhood meeting with police and fire personnel hosted by residents, is a good idea.

Other ideas included using area marshals who could get the word out in case of emergencies, having an emergency resource section on the city’s website and encouraging residents to sign up for automatic alerts from the city.

Council took no action but agreed to continue discussions and planning for emergencies.

“Hopefully, nothing is going to happen, but I think the mayor had a good idea,” Gerdes said regarding emergency evacuation planning updates.