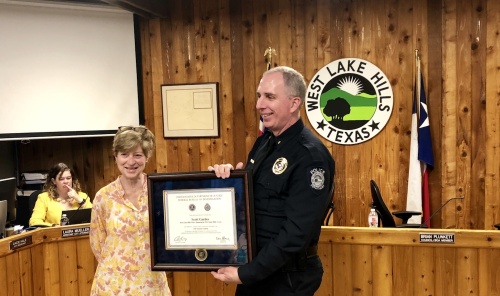 The timeline for a potential $15 million to $20 million November bond election is not where West Lake Hills staff and City Council originally hoped it would be by mid-April due to reasons beyond their control.

The Federal Emergency Management Agency’s flood plain maps have recently changed, and some of the proposed projects on the bond are now on land that is considered to be in the flood plain. The map changes added complications for the architects the city hired to work on plans for new facilities that would be funded by the bonds.

“This has thrown some curves into what they thought would be a simpler situation,” Mayor Linda Anthony said about the design holdup.

Items on the timeline, such as a special meeting to discuss city facilities—including concepts and proposals for a new police department— and town hall meetings for the public will all have to be moved back.

“We’ll adjust the timeline when we know more about the schedule with the architects,” Anthony said. “We can push a bond election out to next spring if needed. I feel strongly that when we do move forward we need to have as much detailed information as possible to engage the public in a thorough and informative manner, ensuring what we’re proposing has been fully vetted.”

Mayor Pro Tem Jim O’Connor suggested reviewing the bond timeline at every meeting, and council agreed it should be on the agenda henceforth.

“We might realize there’s no way we’re going to be ready for a November election,” O’Connor said. "It would be better to know that sooner rather than later.”

City Administrator Robert Wood said he and Finance Officer Vonda Ragsdale have been talking to the bond council and financial advisory about debt policy and have a draft ready to go.

“[Bond] work is still going on behind the scenes,” Wood said, adding information on debt issuance will not be ready to bring forward until a more definitive price tag for new city facilities is set.

Anthony said she is also reluctant to appoint a bond advisory committee until the facility item is resolved, even though the city knows what the engineers are proposing for the street and drainage components of the bond projects.

“Because of the FEMA change, we also asked [the city engineer] to look at two, possibly three projects on the drainage and road projects that the flood plain might impact,” Anthony said. “One for sure is Camp Craft Road, the other is a Yaupon [Valley Road] drainage item and then possibly a Westlake Drive item.”

The city must make sure they have engineered the flood plain changes into the cost estimates for the projects, Anthony said.

“Luckily we’re not dealing with this after the fact and know about it going in,” she said.

Scott Gerdes, West Lake Hills police chief, recently graduated from the FBI National Academy program and was recognized for his achievement at the meeting.

Gerdes completed graduate-level coursework along with physical challenges that included running, climbing over walls, scaling nets, crawling under barbed wire and through muddy water, and more.

“I appreciate the mayor and council allowing me to go,” Gerdes said. “It’s always been a dream of mine.”

Anthony said she was thrilled Gerdes was offered the opportunity to attend, learn the latest trends in policing and connect with law enforcement contacts from across the country.