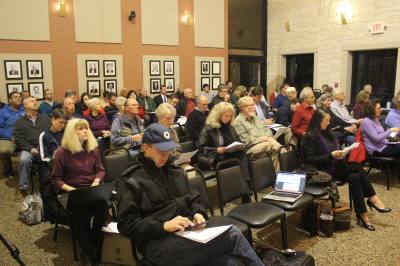 Among several changes approved during the Feb. 19 meeting, the new code language states a city official or other authorized agent of the city shall only enter into any property within the city for the purpose of administering or enforcing the provisions of the city’s code of ordinances and ensuring compliance.

"This turned out to be a lot more than we thought," City Attorney Cobby Caputo said, adding that as the working group that was formed in November that consists of several city representatives dove into the issue, they discovered there are many provisions in the city code allowing for people to enter property.

The changes come following an official report filed in late 2018 against a city employee alleging improper actions as well as several complaints from Lakeway residents.

"This is the product of about three months' worth of meetings," Council Member Laurie Higginbotham said.

Officials took the matter public at Lakeway's Nov. 19 City Council meeting. Lakeway City Manager Steve Jones said a code-enforcement officer, responding to a complaint, drove to a residence to perform an inspection and determined that a permit was required for construction work taking place at the home.

The homeowner later filed a police report claiming the city employee entered his home illegally while he was not home.

Higginbotham said in November she would serve as a council liaison to help further amendments to the city code preventing similar incidents from happening in the future.

“I think these are serious allegations. I want to make sure the investigation is thorough. I think we need to make some changes to the code, and I’d like to help do that,” Higginbotham said at the Nov. 19 meeting.

Among numerous other additions and adjustments to city code involving entry of property approved at the Feb. 19 meeting, language was added stating a city representative must first identify him or herself, present the proper credentials and request permission to enter a property from the owner or resident, tenant or lessee if it is occupied.

Other stipulations in city code:

1. If a property is not occupied, the city’s representative will make a reasonable effort to locate the owner or the designated agent of the owner regarding the property to request permission to enter.
2. If entry is refused, or if the premises are unoccupied and the owner or designated agent cannot be located, the enforcement officer or representative may seek to obtain a lawfully issued administrative warrant.
3. The code official shall be the sole code-enforcement officer to whom an administrative search warrant may be issued pursuant to the Texas Code of Criminal Procedure article 18.05.
SHARE THIS STORY

Students, staff and visitors will no longer be required to wear masks on campus, according to a Nov. 30 districtwide email.

Road conditions were worsened by the 2021 winter storm in February, resulting in the city needing to complete more extensive repairs this year than in previous years.