Wide open suburbia: The pros and cons of living in unincorporated communities in Western Travis County 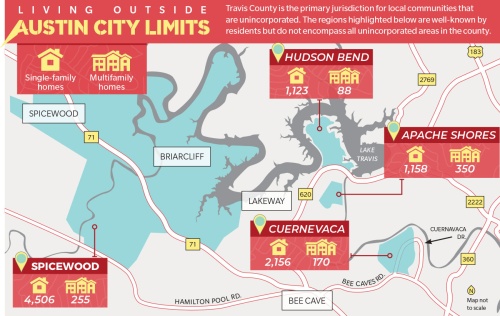 Water is obtained at Mitch Roberts’ property in Hudson Bend via rain harvesting – an alternative to drilling wells for residents who are not serviced by a water utility district.

Roberts’ property is in the Cardinal Hills area, a neighborhood that was never fully developed. Lots were subdivided and platted, but some streets were not paved, and though the city of Austin provides electricity services, it does not provide water. Roberts' brother lives on the land and has a 10,000-gallon-capacity rain-harvesting system. His daughter recently purchased a portion of the property and installed a 12,000-gallon system.

“Would we prefer city water?” Roberts asked. “We do pay taxes to them, and it’d be a lot easier than messing with filters and valves, but to remotely run a water line half a mile here to get city water would cost about $100,000.”

Whether it’s Cuernavaca, Apache Shores, Hudson Bend or Spicewood, life in the unincorporated areas of Travis County abounds with differences, both subtle and obvious, from the incorporated city counterpart. Beyond water issues, the way people interact with and handle taxes, government, infrastructure, development and code restrictions can vary depending on the area. But most residents agree living in an unincorporated area often requires substantially different strategies.

In Hudson Bend, Roberts said he has seen numerous people take a 500-gallon water tank to a fire hydrant, fill it up and return it to their house on a weekly basis.

“The authorities must know this is happening,” he said. “It’s not fair to people like my brother that others go to the municipality district hydrant and take the water while we pay utility district taxes but don’t have water service.”

The county is the primary jurisdiction in unincorporated areas, and in west Travis County Precinct 2, Commissioner Brigid Shea oversees unincorporated communities that include Steiner Ranch, Comanche Trail and Glenlake. Their representative governments are often less formal than their incorporated counterparts.

“I’ll go to those neighborhood meetings,” Shea said. “We view them as our immediate constituents whenever there is a problem. They have no other government entity to get assistance from, so we are very responsive.”

As examples, Shea said she has worked with the Texas Department of Transportation and Steiner Ranch residents to install a stoplight at RM 620 and has helped find funds for flashing crossing lights at area schools.

One of the county’s bigger projects is a pilot program to help prepare neighborhoods for floods and fires. The first drill is planned for November.

“We’ve been working with the Comanche Trail community for over a year to create a neighborhood fire drill, since there is only one way in and one way out,” Shea said. “We weren’t able to find examples of what to do anywhere, so we are creating the plan. It could be valuable to communities all over.”

How living in an unincorporated area is defined differs on a house-by-house basis, said Brian Talley, Regent Property Group founder and Austin Board of Realtors board member. A home could be in the extraterritorial jurisdiction of a city, or it may be part of a homeowners association within an unincorporated area. Talley said some homeowners want the rules and regulations that come with HOAs, but many who opt to live in an unincorporated area are seeking flexibility regarding what they can build on their lots. He added that eclectic neighborhoods with dirt roads are often around the corner from newer subdivisions.

“If you’re looking to build a workshop or detached garage, or you want to run a business out of the back of your house, that scenario is more likely in unincorporated areas,” he said. “Cities have a lot of rules, while the county doesn’t have that many regarding a variety of building options.”

Generally, Talley's clients wanting property outside city limits are seeking separation from traffic and a slower lifestyle. Like utility services and taxes, home prices vary in every neighborhood. While houses tend to be more affordable the farther they are from downtown Austin, some of the newer developments contain expensive homes, Talley said.

While unincorporated neighborhoods continue to be built out, Talley said in his experience, they are still not growing as fast as subdivisions within incorporated areas.

“I think people prefer to be in areas where there are consistent quality standards,” he said. “But, the ones who want to be in non-traditional neighborhoods really want to be there.”

Shea agreed that less noise and congestion, along with lower taxes, are strong selling points.

“The downside of not paying taxes to a city is that they have fewer services,” she said. “The county doesn’t have resources to provide what cities do.”

She said another trade-off is that there are limits on what the county can do if, for example, your neighbor decides to build something you don't like.

“Legally they could put a pigsty next to your home,” she said. “City zoning laws don’t allow that, but living out in the county means fewer restrictions.”

The Spicewood Community Alliance is educating communities throughout the Spicewood area about potential benefits of incorporation, such as combatting unwanted development like the proposed Spicewood Crushed Stone LLC quarry planned to go between two residential neighborhoods.

“We’re not recommending Spicewood become a big, incorporated city like Austin,” Alliance President Matthew McCabe said. “Rather, there could be a bunch of small communities, because each group has unique desires.”

For example, some neighborhoods already have self-supporting systems, and some prioritize preserving Krause Springs more than others, McCabe said.

“When we started the Save our Spicewood initiative we were trying to initiate incorporating all of it,” he said. “We got pushback because there are people who have been here for generations, new people from out of state, and everyone has a different idea of what a ‘city’ means.”

Carrie Guipe has spent a total of 13 years in Cardinal Hills and Apache Shores. She said fireworks being set off all year and related fire-safety issues are a problem, along with loose dogs and people shooting firearms on small property lots.

“There is a home that has been under construction for over a decade that includes framework with junk and trailers on the small lot,” she said. “No one can do a thing about it legally.”

Guipe described Apache Shores as a camp-like community that once had horse stalls and places for vacation trailers.

“We maintain much of that, and so much volunteer effort goes into trying to preserve our community and make it better,” she said. “The county and state are not always supportive. We have paved our own roads. The county maintains some roads, but people have had to fight hard for road signs and repairs.”

But there are positives, too. Guipe said she obtained a Lakeway library card despite not living in city limits, and its bookmobile services Apache Shores.

“We also benefit from an amazing school system [in Lake Travis ISD],” she said, adding that Lakeway and many new neighborhoods tend to have overwhelmingly strict deed restrictions and rules. “So we benefit from not being forced to keep our lawns green or have a special place for trash cans. We can park on our streets, and Travis County sheriffs have been good to us.”

Roberts, who also lived in the Cuernavaca area for seven years, agreed that law enforcement has been good.

He said he believes the trend of more marinas, restaurants and hotels coming farther west will continue with area growth.

“What it feels like it’s coming down to now is a sort of conflict between the ‘old timers’ and their wild west attitudes and the newcomers who have lived with regulation, benefitted from it, and never imagined a residential area could be like this,” Guipe said.

She said it is also confusing to move to ‘Austin’ and then be told she is not part of the city and cannot access certain aspects, but then hear the same thing from the city of Lakeway.

“This area has grown so rapidly – it’s straight-up suburbia now, but the rules for living here haven’t changed,” Guipe said. “We are neither here nor there.”
SHARE THIS STORY