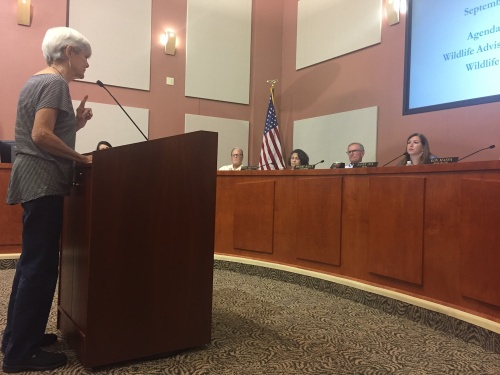 A lakeway resident addresses City Council about the hiring of a new wildlife management consultant at its meeting Monday, Sept. 17.

After placing a 12-month moratorium on a controversial deer trapping program and renaming and repurposing a six-person wildlife advisory committee, Lakeway City Council has hired a consultant in pursuit of a more educated approach to the city’s wildlife management plan.

But much like the Trap, Transport and Process program that city officials suspended on Aug. 20 in order to study other wildlife management options, the hiring of Warren Bluntzer as a wildlife consultant has already been met with opposition from some Lakeway residents.

Bluntzer is a wildlife game biologist with 45 years of experience and will be an asset in terms of educating the Lakeway community about all different aspects of wildlife management, Haley said.

“He comes with credentials that will serve us well,” Haley said, adding that educational outreach has been something Lakeway citizens and officials have been lacking over the last few years.

He also said the Humane Society gave a presentation to the advisory committee and offered to provide a wildlife biologist at no charge to the city, but the committee opted for Bluntzer.

Several Lakeway residents cheered the suspension of the trap program last month, a show of emotion that came after citizens addressed City Council about their desire to see the program terminated, or at least paused. On Monday, citizens again expressed their concerns, this time over the recommendation of the hiring of Bluntzer.

Lakeway resident Pam Bilderback said that the committee needs to interview more wildlife biologists to get a better idea of the city’s options. She expressed hesitancy about Bluntzer’s possible methods.

Resident Dodie Davis said that the moratorium on the trap program has only been in place for one month, and it is too soon to hire a wildlife game biologist. Like Bilderback, Davis said she wasn’t sure Bluntzer is the best choice.

“He is a proponent of TTP, and he does not have any experience in any other kind of deer management,” Davis said, adding that Bluntzer is also not the most economical choice for the city. She reminded council the Humane Society offered the services of a wildlife game biologist for free.

Advisory committee member Dennis Hogan said Bluntzer’s experience qualifies him as the best option for education and advisement, but that ultimately it will be up to the committee to decide how to proceed on policy.

Whether it is through the continuation of the trap and process method, the injection of hormones into the animals or even a trap and transport approach, Hogan said the committee will have to come up with cost figures before any action is taken.

“I don’t see it a cart-before-the-horse kind of thing,” Hogan said. “We will be getting into all of those issues and not be overlooking them.”

Hogan also said that the wildlife committee is still in communication with Nikki Prather from the Humane Society of the United States. He said any advisement from their wildlife biologist would also be considered, but that since she was from New York, she was not the best option in terms of accessibility.

Lakeway City Manager Steve Jones said he was glad officials are having an open discussion with Lakeway residents. Though Lakeway needs some kind of control for the deer, he said he is not yet sure what that control method should be.

“The clock is running,” Jones said. “We need to get experts in to educate us and come to a decision pretty quickly so we can deal with the situation before the year is gone.”

Bluntzer said he would like to wait to comment until his contract with Lakeway becomes official, but he is looking forward to having an open dialogue with the City of Lakeway and its residents.

Haley said Bluntzer will come on board for $2,400 a month.

“That will be the cost for us to reeducate ourselves,” he said.