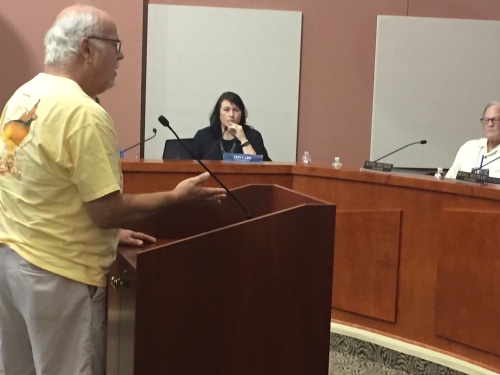 Lakeway resident John Caporal brought up concerns about the environmental impact of a proposed car wash project on Birrell Street.

The Lakeway City Council on Monday zipped through several items on its Monday agenda pertaining to new businesses, zoning changes and land tracts. Most made the cut but one, a proposed car wash project, did not.

The City Council unanimously approved a zoning change request and a special-use permit for 1.24 acres of land on Bee Creek Road from agricultural to office/retail for a New Day Child Development Center that is currently leasing a facility nearby on the same road.

The project would require a special-use permit due to its proximity to the middle school, and the development calls for about 5,000-gross-square-foot building and 20 parking spaces.

A letter from 360 Professional Services Inc. to City Engineer Paul Duncan also states Lake Travis ISD in June denied secondary access to the child care facility through an easement on one of LTISD’s private drives.

Data from the facility’s operational plan show an anticipation of an increase in traffic from of about 10 to 15 percent over that of its existing location.

City documents state the move would increase the facility’s space by about 2,100 square feet and allow for an enrollment boost from 47 to 90 children.

The council unanimously approved a request from Blue Sprig Pediatrics for a special-use permit to operate a medical office for autism therapy out of its site located at Lakeway Liberty Center on RR 620.

According to a report to the City Council from Blue Sprig, the clinic would not make any changes to the existing exterior structure and the proposed permit would not have an adverse effect on surrounding property values.

Blue Sprig’s request states the clinic's goal is to have 30 children in the clinic, and it would operate Monday through Friday during normal business hours.

After a brief adjournment to executive session, the council unanimously denied a request for a special-use permit from Masterplan, the agent for the owner of about 1.0742 acres of land at 100 Birrell St., to operate a car and truck washing facility called Purewash Carwash.

The tract of land is part of the Lake Travis Transitional Medical Center preliminary plan. Although an initial review of the conceptual site plan states the proposed car wash is not expected to have a negative effect on surrounding neighborhood property values or on traffic, city officials were not convinced it was the best use of the parcel of land.

Mayor Sandy Cox said she struggled to see why Lakeway needed so many car wash facilities within such close proximity. Two existing car wash locations nearby include one at the H-E-B grocery store on RM 620 and one at the Valero convenience store on RM 620 across the street from the proposed carwash site.

Other car wash facilities in the area include a Lakeway Carwash & Storage to the north of the proposed Purewash Carwash and a Go Wash II to the south.

Cox was not the only city official questioning the proposal.

“I just am not getting real positive feelings from the people that elected me that we need another carwash,” Council Member Ron Massa said.

During public comment Lakeway resident John Caporal brought up concerns about environmental impact, and said although he “didn’t have a dog in the fight,” he wanted to make sure the issue was considered.

The council unanimously approved a request from Lake Travis ISD for about 12.21 acres of land on 4219 Bee Creek Road for final plat approval of the Bee Creek Elementary School subdivision.

The city of Lakeway annexed the tract and zoned it for government, utility and institutional use in July 2016.

City documents state access to the proposed lot will come from Bee Creek Road, and have frontage on future Tomichi Trail, a collector street within Lakeway Highlands Phase 3.
SHARE THIS STORY