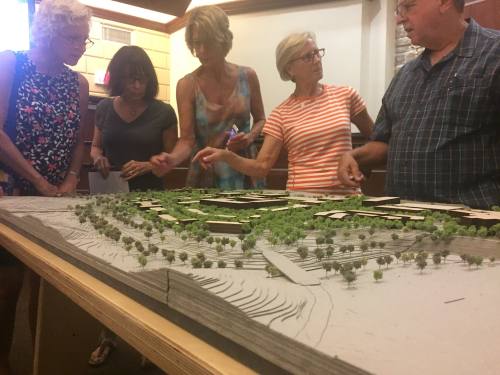 Several people attended Tuesday's workshop with the Bee Cave Planning & Zoning Commission and the City Council to learn more about the proposed development called The Village at Spanish Oaks.

Public comment was not allowed during the 5 p.m. workshop; still dozens of citizens showed up to hear a discussion among the Bee Cave Planning and Zoning Commission and the City Council about the 80-acre development called The Village at Spanish Oaks.

The project would be a joint venture between Spanish Oaks developer CCNG Inc. and Arizona-based Greenbrier Southwest Corporation. Included in the proposal are room for shops, restaurants, office buildings, an upscale inn and spa as well as a wide range of residences, according to a press release issued by the developers.

The development will be located off Hwy. 71 West, adjacent to the Spanish Oaks residential community and golf club.

During the workshop, Bee Cave Planning and Development Director Lindsay Oskoui broke down plans for the development, which if approved, will come in phases starting with infrastructure preparation and ending in the construction of buildings.

Vehicular connectivity from residences to shops was another major point of discussion along with pedestrian trails and bike lanes. Oskoui also described the main aesthetic of the development, which calls for retail prominence along Hwy. 71, as well as senior living residences at the western part of the development. Residential areas would be concentrated more along the interior and southern areas, and the plan also calls for a greenbelt-style trail area to border the southern rim along Little Barton Creek.

By far the most talked-about issue centered on traffic concerns during and after construction of the project, which entered into the workshop discussion several times. The prime focal point was roads connecting Hwy. 71 with the development.

Also holding weight during the workshop was the issue of traffic from Great Divide Drive along the western edge of the development.

Greenbrier Southwest co-owner Timothy Bolinger said prior to the workshop the development is planned to be created in phases, and as a mixed-use project, some of the uses will be ready sooner than others. He added that planning for the overall construction has included provisions for as little collateral effect as possible to spill outside of the project borders.

Greenbrier Southwest co-owner Kathryn “Casey” Bolinger said prior to the workshop the combination of a small market with restaurants and shops should help alleviate Hwy. 71 traffic congestion since residents living south of the thoroughfare will have more options on that side while still retaining all of the food, entertainment and shopping options north of Hwy. 71.

“And this isn’t an overnight program,” Timothy Bolinger said. “We’re not talking about dropping all of this on the area tomorrow morning.”

Next steps in the process:

The City Council approved a motion to direct staff to continue review of the site plan for construction of a roadway that would connect Bee Cave Parkway to Ladera Boulevard.

The road is on land owned by Bee Cave resident and developer Adrian Overstreet. Several residents from the Ladera neighborhood where the road is proposed voiced their desire to see it built soon, saying they believe it would ease traffic congestion in the area.

Bee Cave Planning and Development Director Lindsay Oskoui said once comments are resolved following review of the proposed road, the item will be placed on an upcoming Planning & Zoning Commission agenda, and then it will presumably land on a City Council agenda.