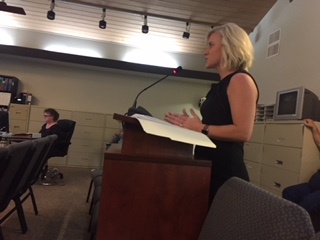 Newly imagined signage, a more efficient and user-friendly website, catchier stationary — these are some of the changes anticipated in the coming months for the City of Rollingwood.

Officials have been working on bringing a comprehensive rebranding effort to the city since mid-2018, and that effort became official Wednesday night.

The Rollingwood City Council's approval of a motion to work with communications firm Buie & Co. was the final step toward beginning a project that saw approval from the Rollingwood Community Development Corporation earlier this year.

Prior to City Council’s approval, the RCDC, an entity that is underwriting $19,500 of the $33,500 project (the City of Rollingwood will cover the other $14,000), had to abide by certain regulations prior to approval that included a 60-day waiting and advertising period allowing for public comment.

“The city really wanted to get this right, so that’s why it took maybe a little longer than everyone would have preferred,” Rollingwood City Administrator Amber Lewis said.

City officials wanted to make sure the contract also included facets such as an improved website and city stationary, elements that were just recently added back into the project with Buie & Co., Lewis said.

Buie & Co. has been working with RCDC since February to create a rebranding project, and during those talks both groups decided the City of Rollingwood should be involved, Buie & Co. representative Ashley Kegley-Whitehead said.

“The City of Rollingwood is just like any other business or person that you would be trying to promote,” Kegley-Whitehead said.

The process is about figuring out the values of the community, how to identify the authenticity of Rollingwood and how to encapsulate it into a simple stamp that can be replicated and reused, she said.

The four-phase plan laid out by Buie & Co. includes a discovery, branding, city signage and rollout portion. An initial timeline for the rebranding is slated to conclude by January 2019.

Lewis said the next step will be to set up a meeting with Rollingwood Mayor Roxanne McKee and Kegley-Whitehead. The meeting will establish a project committee of representatives from across the city spectrum, including but not limited to the RCDC, The Rollingwood Women’s Club and the Rollingwood Gentlemen’s Club, as well as prominent figures from the Rollingwood business community.

“That committee would be meeting probably every two weeks to make sure the project is accomplished,” Lewis said.


By the numbers: Buie & Co. cost per service