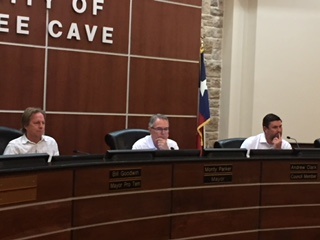 Bee Cave citizens are a little closer to having an expanded and improved hike and bike trail near RM 620 that has been in the works since June 2017.

During executive session Tuesday, Bee Cave City Council members authorized Mayor Monty Parker to execute an easement agreement with Relocke LLC that will allow for completion of a much-anticipated 3/4-mile trail paralleling RM 620 from Falconhead Boulevard to Bee Cave Central Park. Parker said Wednesday city officials are hopeful the trail will be complete by the end of September.

The Relocke portion of the trail is in the vicinity of the commercial plaza on the west side of RM 620 north of Ladera Blvd. It was the lone holdout among seven total the city approached for easements in order to complete the trail, mainly due to the property owner’s desire for the trail go through a vegetated area farther from the commercial plaza.

Parker and the property owner signed the agreement Tuesday night after the executive session closed.
The other six entities agreed to give up their easement sections at no cost to the city, and the Relocke negotiation means that there will be no break in the trail.

City records state that keeping trees on the trail is a priority for the project, which calls for a 10-foot-wide trail constructed from concrete and stabilized crushed granite.

The project cost is totaled at $551,682 and will be funded by the Bee Cave Economic Development Board.

A tie vote resulted in Bee Cave City Council denying the latest version of a development plan for a Kiddie Academy child care center to be located on the south side of Hwy. 71 between Vail Divide and Del Dios Way.

Council members expressed concerns such as the number of parking spaces within the plan, and ultimately the item resulted in a split vote, with Mayor Parker and Mayor Pro Tem Bill Goodwin voting yes and Council members Marie Lowman and Andrew Clark voting no. Parker said the vote may have turned out differently had the meeting included absent council members Kara King and Jon Cobb, but there was no way to know for sure.

Because this is a site plan and not a zoning issue, the council could reconsider the child care center as soon as the next city council meeting Sept. 11, Parker said.

The proposed development is for a 39-foot, 3-inch-tall, one-story building with an area
of 10,397 square feet. The structure includes eleven classrooms, two offices, a restroom and a small kitchen and lounge area. Plans for the exterior of the facility include a fenced-in playground and a pond.

City documents state the building, which would be built on 1.612 acres within the Bella Colinas Commercial subdivision, will not have direct driveway access off of Hwy 71 but will have access via a joint-access road parallel to Hwy. 71.

City Council approved action to connect a 45-acre plat of land known as the William A. Brown tract located west of Great Divide and south of Hwy. 71 and the Lake Travis Youth Association athletic fields.

“There were two plats from the property that we bought, and we just merged them into one,” Mayor Parker said.

The city of Bee Cave purchased the Brown plats in December. At that time a portion of the tract lay within the city limits and the rest within its extraterritorial jurisdiction. The city of Bee Cave annexed the remainder June 12, and on July 24 Bee Cave City Council zoned the land public.

Signage listing most of the prohibitions is already in place at the park, but those rules were not enforceable by citation until council passed the ordinance Tuesday, Bee Cave Police Chief Gary Miller said.

The ordinance prohibits park attendees from leaving their dogs unattended, improperly disposing of waste, eating at the dog park and failing to use a leash in designated areas, among many other regulations.

Owners in violation of the stated rules may now be subject to a maximum fine of $500, Miller said.

Prohibitions under the new ordinance: