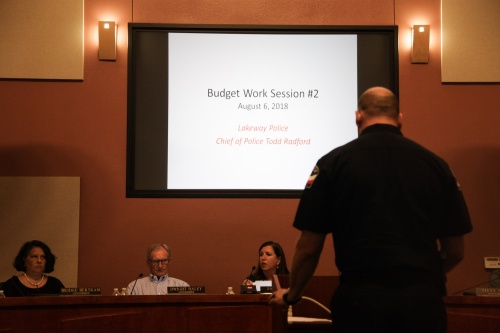 During the meeting, the council agreed to add a total amount of $234,766 for requested personnel and services as well as a $350,000 reserved for capital reserve fund use to the proposed general fund expenditure for fiscal year 2018-19.

To balance the revised total general fund revenue and expenditure and ensure a reasonable ending fund balance, the property tax rate has to be set at 17.41 cents per $100 of value, City Manager Steve Jones said. If adopted, property tax bills for taxpayers would increase by $48 a year, Assistant City Manager Julie Oakley said.

Adopting the proposed property tax rate, the revised draft would now set the budgeted general fund revenue for FY18-19 at $14.30 million and the expenditure at $14.28 million, according to city documents. The revised budget would leave the city an ending fund balance of $3.63 million, which stands for approximately 25 percent of the operating expenditures.

Property tax revenue, projected at $6.08 million, would remain the major contributor to the city's general fund revenue. Sales tax revenue is projected to be around $3.99 million.

Council Member Bridge Bertram said the city could consider leaving the choice of insurance plans up to individual employees instead of offering full dependent coverage. Mayor Pro Tem Ron Massa said due to the rising costs, the city should look at different options to provide health insurance.

City staff will circle back to the city's consultant to research different scenarios and bring the results back for council discussion at the next Council meeting, Oakley said.

Council also heard a presentation from Lakeway Chief of Police Todd Radford during Monday's meeting. As included in the most recent draft budget, Lakeway Police Department is requesting an additional police officer position, which would cost $86,188.

Radford said the number of patrolling officers is falling short due to the development of the city over the past decade. Full coverage of all the patrol districts can only be enforced 40 percent of all time, he said.

A K-9 officer is currently working patrol shifts as well, Radford said. An additional police officer would allow him to focus on K-9 duty and bring his police dog onto more drug-sniffing assignments, he said. The police dogs are currently deployed 20 percent of all time, Radford said.

Massa said he was worried that the use of police dogs is relatively low compared to the cost of the program. He also expressed concerns over the city's "legacy costs" over donations, which in this case means the city's continuous spending on the donated police dogs. Mayor Sandy Cox echoed his idea and argued that the council should have a say in determining whether to accept a donation.

The council agreed to the proposed expense on the extra officer as well as an equipment operator for the Parks and Recreation Department and a permanent part-time lifeguard. The council also revised the expenditure on several services and added a committee contingency fund of $50,000 to the list, agreeing the use of such fund requires council approval.