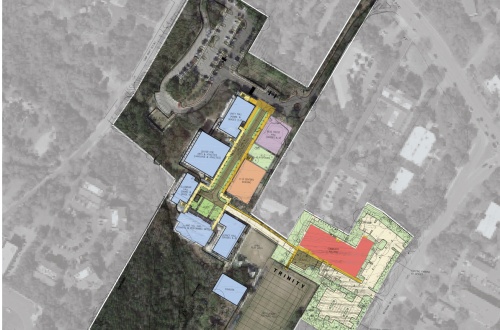 Trinity Episcopal School can move forward with its plans to expand the campus after West Lake Hills City Council’s unanimous approval of an amendment to the planned development district at Wednesday night’s meeting.

The amendment will allow the school to build a new 32,000-square-foot athletics and performing arts building, which is bigger than city code normally permits.

“We have to make the gym and locker room a certain size,” said Allen Smith, Trinity board of trustees member. “If we do a single building with a smaller footprint, the only place to cut space would be from the music and arts program, and we don’t want to put athletics above music and art. It’s necessary to keep them equal to provide the best programs for our students.”

Smith said when they looked at making a saperate building for each program, the environmental impact would be greater.

Mayor Linda Anthony said she agreed a single, larger building was a better alternative and would conserve more materials and energy than two smaller buildings.

The city originally put the limit at 540 students but approved the increase at Wednesday’s meeting. Trinity staff agreed to report its enrollment numbers to the city every year.

“We ask we not be treated any different than the public school,” Smith said in regards to an enrollment cap. “Kindergarten through fourth grade allows no more than 22 students per section (in public school). We have agreed to be more restrictive and extend that all the way through eighth grade.”

A roadway agreement was also included to address possible traffic impacts, mainly on Westbank Drive. The agreement said after the project has been completed, Trinity will have to conduct another traffic study and, depending on the results of the study, the school would be responsible for making any necessary improvements to Westbank Drive caused by Trinity traffic.

The school, which sits on 21 acres at 3901 Bee Caves Road and 950 Westbank Drive, will begin the permitting process next. Smith said the long term project may take five to eight years.