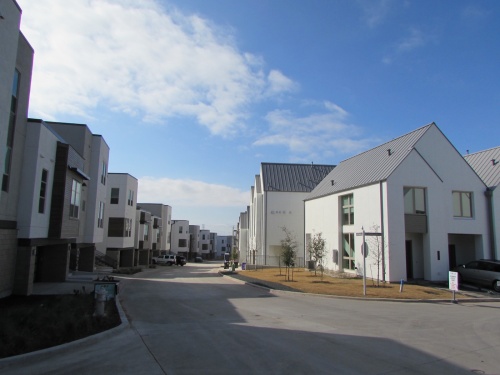 By early 2019 the Westlake area is expected to add over 240 apartments and townhomes at 2500 Walsh Tarlton Lane, Austin.

Located 1 mile outside of the West Lake Hills city limits two multifamily housing developments began accepting residents in 2017 and will be built-out in early 2019. The Walsh will add 55 townhomes for purchase and Westerly 360 will offer 189 rentable units.

The new developments add housing options that are hard to come by in the Westlake area. Only 25 total units are zoned for multifamily use in the West Lake Hills city limits, compared to 1,408 single-family homes, according to City Planner Ashby Grundman.

Furthermore, about 500 single-family homes make up all the residential options in the city of Rollingwood, where multifamily zoning is not offered in the city code, Rollingwood Building Official Mike Alexander said.

“What made us look at Westlake [for Westerly 360] was that we saw the need for [rentable options],” Westerly 360 Business Manager Cayce Pettyjohn said. “We saw there were few multifamily communities in the Westlake area, and what is there is at least 10 or 15 years old, so we wanted to be able to fill that gap for the
community.”

However, large developments such as Westerly 360, The Walsh and Lynd at Lake Travis—an under-construction development of over 300 apartments at 2208 RM 620, Austin, in the Hudson Bend area—increase populations in isolated pockets of West Travis County. This creates future challenges for local school districts and area traffic.

With median home prices consistently over the $1 million mark in the Westlake area, multifamily housing developments such as The Walsh and Westerly 360 offer more affordable methods of entering or relocating within the area, The Walsh’s Project Manager Vince Costa said.

Rollingwood City Administrator Amber Lewis said that older residents looking to downsize currently have very limited options of staying in the community they have called home for years.

Costa said individuals interested in The Walsh include those looking to downsize but stay in the area, those not interested in the maintenance required to preserve many of the area’s older homes and young families that are interested in getting their children into Eanes ISD.

In a speech during the Lake Travis Economic Forecast on Jan. 17, Doug Land, a Kuper Sotheby’s International Realty broker, emphasized the importance of affordable housing on retail in the Lakeway and Bee Cave area.

The majority of properties for rent in the Lake Travis area are located on the outskirts of the city of Austin near Four Points, such as the new Cardinal Point development at 11015 Four Points Drive. Land said that while small pockets of affordable options do exist closer to Lakeway, developers will have to get more creative to fill the need, such as utilizing smaller lots.

Pettyjohn said Westerly 360’s decision to build both townhomes and apartments was to offer living options to those with needs that might not be met elsewhere in the community.

“For people who are attracted to Eanes ISD but are not ready yet to buy because they are new to the area, I feel like this is a good starting point for them so you can get a feel for the community and make sure this is where you really want to be,” she said.

Since Eanes ISD is not a high-growth district and has a condensed geographical footprint, new developments that have the opportunity to greatly impact district schools are hard to come by, Eanes ISD Deputy Superintendent Jeff Arnett said.

However, The Walsh and Westerly 360’s proximity within the attendance zones for Cedar Creek Elementary School and Hill Country Middle School could lead to future overcrowding, he said, making it a project the district has watched since it was proposed.

“Unfortunately [the developments] are being built in the attendance area of the elementary school that is experiencing our greatest growth consistently,” Arnett said. “The capacity issues at Cedar Creek Elementary and Hill Country Middle are more severe than at any others in our district.”

Based on district demographic projections, he said he believes the district can moderate and absorb the growth by reconfiguring classrooms and adding portables without redrawing attendance boundaries or looking at adding new facilities through a bond.

“[Redrawing boundaries] is still probably a couple years away before we seriously deliberate,” Arnett said. “Redrawing attendance boundaries may be the most complex decision that a school district can make. The Eanes community hasn’t really had to think in that way in a very long time.

“Anytime there are [new] options for families and those options are affordable, then that can be a positive thing for families and the district. When it becomes less than a positive for the school district is if that [new] development is already in the attendance area for a school that is at capacity. That’s the dilemma here.”

Lynd at Lake Travis residents will be zoned in Lake Travis ISD, which, according to Texas Education Agency records, is one of the fastest-growing districts in the state.

Lake Travis ISD had a similar influx of residents when the Mansions at Lakeway, a 350-unit development, opened in Lakeway in 2016. The development is located at 5313 Serene Hills Drive, Lakeway, 1.25 miles west of district’s proposed next middle school, which was approved by voters in a bond last November.

It is also the only multifamily-zoned complex and the largest development of rentable properties currently within the Lakeway city limits, according to city records.

Bee Cave Planning Director Lindsey Oskoui said all of the multifamil-zoned areas in Bee Cave have been developed over the past 15 years. While some mixed-use zoning or a planned development district could be established by City Council in the future, the majority of options are already under development or built out, she said.

The city’s comprehensive plan also outlines a 2-1 home-to-multifamily unit ratio, which currently is not being met. Bee Cave has about 2,580 single-family homes compared to 1,720 multifamily units, she said.

Ray Miller, Lakeway building and development services director, said there are no additional lots or remaining areas within the city of Lakeway that are zoned as multifamily residential. However, a planned unit development, or PUD, could have multifamily aspects, he said.

Apartments could also be built in a residential PUD in Rollingwood if an agreement was approved by the city, Alexander said. However, PUDs in Rollingwood require at least 5-acre plots, all of which have already been developed in the city.

Lewis said if a developer approached Rollingwood with a site plan for apartments, it would likely have to be a redevelopment of an existing property.