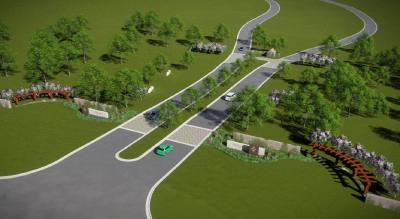 A rendering shows the proposed entrance to Provence.

Provence, a future housing development located at 16314 Hamilton Pool Road, Austin, broke ground Jan. 18 on the first phase of the project after four years of planning.

While Masonwood Development Corperation is planning 1,600 residential lots for the entire project, the first phase will include roughly 670 homes, according information provided by Marketing Director Samantha Meredith. About 150 of the lots will be part of the development’s initial build.

Masonwood plans to begin marketing properties this fall and could sell the first lots as early as January 2019, Meredith said.

The first phase’s amenity center—which will include a pool, picnic area, outdoor fireplace, barbecue area and a community garden—is scheduled to be built by the fall. Provence is the latest planned community to emerge in the Hamilton Pool Road area.

In October, Bee Cave City Council approved a development plan for Creeks Edge, a gated subdivision of 30 homes spread over 58 acres. A portion of the property is in Bee Cave’s jurisdiction, the rest in Austin.

In September, Bee Cave City Council approved rezoning of 94 acres for the planned Signal Hill Estates, where 61 homesites are planned, bordered by the Bella Colinas community to the west.