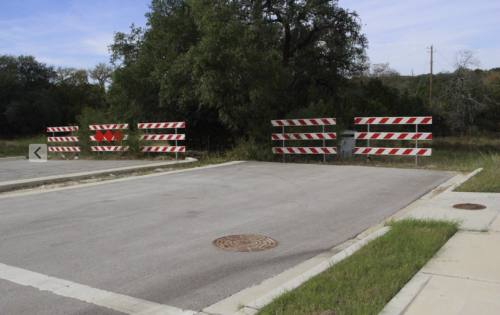 Barriers block what is expected to be a four-lane extension of Lakeway's Main St. into what are known as the Stratus and MUD tracts.

What we reported: A significant, decade-long development project that aimed to complete development of Lakeway’s core area was publicly presented to Lakeway City Council in August. Developer Legend Communities, the same group behind Tuscan Village on Lohmans Crossing Road pitched an 80-acre, multi-use retail and residential community that could become the cultural heart of the city.

Legend CEO Haythem Dawlett told City Council in August the City Center concept will include a full-service hotel with a conference component, a variety of homes, a community venue, a village green space, retail and office space. He also said the proposal would include a performing arts center or, in the event the center is not approved by City Council, an alternative concept, such as a movie theater with dining.

Legend COO Bill Hayes said in August the single-family homes in the development will feature porches, be closer to the streets and have small side yards—a design aimed at fostering a “community feel.” A plan for an age-restricted rental complex and housing off the east side of Lohmans Crossing by the new police station is also being tied into the City Center plan, Hayes told Community Impact Newspaper in December.

The latest: The 37-acre Stratus Development-owned property behind the Oaks at Lakeway shopping center is one of 11 connected parcels in the area that Lakeway Mayor Joe Bain said at a Nov. 20 town hall will be developed eventually since they are too expensive not to develop.

Bain said Dawlett gave him a verbal promise he would build the four-lane road extension from the Stratus property as well as linking it with a four-lane extension of Lohmans Spur from the site of the planned police station at Lohman Crossing Road. The unofficial offer is connected to Dawlett’s City Center project. “If we got all this done, that would be a significant improvement to the traffic in Lakeway,” the mayor said in November.

“I think [the September Stratus proposal to give the city 25 acres for parkland in exchange for a 350-unit apartment complex on the remaining land] is a dead issue although [council] has not voted it down,” Bain told the November meeting saying also the city is doing an appraisal on the Stratus property to see what it could cost the city to buy.

The mayor’s estimate for the entire parcel is between $4.5 million to $5.5 million. Voters would have to approve a land purchase, likely in a May bond election, he said.

Added to the cost, is the price of extending four lanes of Main St. from the Oaks – a job that would run an estimated $1 million to $2 million, City Manager Steve Jones said at the November meeting.
But extending Main St. through the next adjoining parcel to Lohmans Crossing Road would be paid for by another development group/land holder, Legend Communities, according to the mayor.

What’s next: There is little movement publicly on the future of other nearby parcels that belong to a church, the local school district and other private developers. Several Lakeway residents told the mayor at the November town hall they hope all land holders will work toward a common vision. The mayor agreed that’s his plan as well.

Dawlett and Hayes are expected to present their group’s updated plan for City Center in the first half of 2018, Hayes told the Community Impact Newspaper. That presentation will be aimed at securing a Planned Unit Development designation for the parcels from City Council.