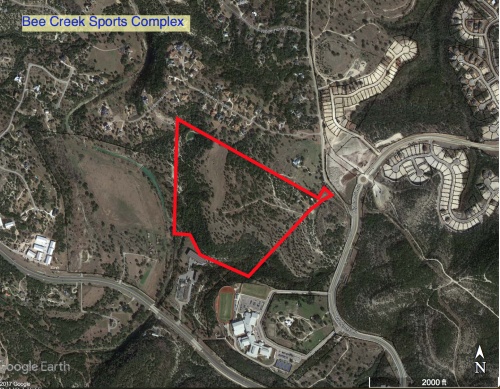 The red border indicates where the 70-acre Bee Creek Sports Complex is slated to go. It is located at Bee Creek Road and Highlands Bvld., in western Travis County.

Lakeway City Council on Dec. 18 narrowly passed a motion 4-3 to establish a citizens’ engagement advisory committee that will seek out ways to increase the city’s transparency and community outreach.

City spokesperson Devin Monk will oversee the committee’s formation and operation. The motion was led by Council Member Jean Hennagin who said during the meeting, “There are two [comparisons] of a healthy and effective government process: transparency and two-way communications. We need to get better [at gathering] the input and I think that’s what this committee is all about.”

Hennagin spoke of opportunities the committee would have including developing ideas on how to: conduct a citizen satisfaction survey; leading current communication processes; suggesting specific focus groups; evaluating online and social media and identifying community partnerships.

Voting against the engagement committee idea was Mayor Joe Bain along with council members Bridge Bertram and Jim Powell, who said he would rather hear from residents directly in an open council or commission meeting than “filtered through a committee.”

The committee will perform its work for a year before council reassesses its value to the city council’s decision-making.

Mayor and council could draw salary, sort of

Lakeway council members Dec. 18 heard from a committee charged with reviewing the city’s charter, which is essentially a municipal constitution governing the city’s laws and system of self-government.

The idea is by allowing the city’s elected officials to receive a compensation for the first time, even if they decline to take the nominal amount, they would be considered city staff and therefore protected from being named individually in any city legal action, according to City Attorney Alan J. Bojorquez who cited Texas’ state tort claims act.

The motion carried 6-1, with Council Member Bertram voting against, stating that council could be better held accountable to residents with a more substantial compensation amount, such as the $150 and $100 for the mayor and council members, respectively—amounts the charter review committee originally recommended.

Council also adopted a charter amendment that enacts a statute of limitations on damage or other legal claims made against the city to six months, in line with state law according to Bajorquez. The review committee reasoned the six-month window would make the claims process more efficient and better protect the city.

A third charter change recommendation related to how boards, commissions and committees are appointed. That item was tabled pending further council discussion in 2018.

Before any city charter amendments become final, voters must approve them in May’s election.
Lakeway voters approved the city’s charter in 1990.

County sports complex gets the go-ahead from Lakeway council

Lakeway City Council on Dec. 18 formally approved an agreement with Travis County for the development of a 70-acre youth sports complex that will be paid for using funds voters approved in the Nov. 2017 Travis County bond election.

$23.55 million will be dedicated for the Bee Creek Sports Complex to be located at Bee Creek Road at Highlands Boulevard. Travis County commissioners have already substantially approved the deal, City Manager Steve Jones told council. After city voters approved the land purchase deal in 2014, the city of Lakeway paid around $3.7 million for the facility the following year.

The Bee Creek Sports Complex is expected to include football, soccer and baseball fields as well as a proposed hike-and-bike trail, Jones said. It is also expected some of the ongoing county maintenance costs will be recouped by facility fees, Jones told the meeting.

The city will have some input into the design, Jones said but the final word rests with county staff. No timeline has been set, but Jones said Commissioner Precinct 3 Gerald Dougherty “wants to get on with” construction. Full Commissioners' Court still has to approve the spending plan.