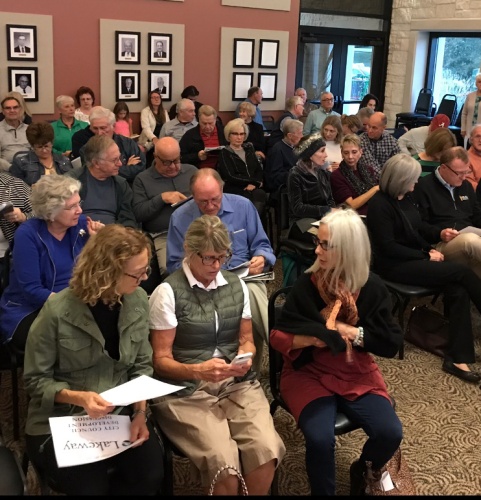 A packed house turned out for a town hall at Lakeway city council chambers Nov. 20 so residents could learn more about options for parcels of vacant land behind the the Oaks at Lakeway shopping center. Mayor Joe Bain shared a vision that included the city's purchase of 36 acres behind the HEB for a community park. The purchase could be paid for with bond funds, Bain said.

Improving the public’s perception of the city of Lakeway is the theme of a new action plan aimed at making the city more transparent and better engaging citizens. The plan comes from an informal team of two city council members and the city’s communications coordinator formed after May’s election.

“We as a city do not have a problem with transparency. We could have a problem with engagement,” Hennagin told the rest of council recommending further work be done on tweaking the city’s website, running a city satisfaction survey on subjects such as city services and governance, and holding more town halls on specific issues such as development. Hennagin also recommended a review of the city’s boards, commissions and committees to make sure they are running at peak efficiency and to gain participation.

Hennagin indicated the engagement team would continue its work this fall.

Police facility land deals are all but done

The city of Lakeway expects to close on the second of two parcels of land Nov. 28 that will, together be the 5.8-acre site of the planned new police facility on an extension of Lohmans Spur Road and Lohmans Crossing.

The first site closed several weeks ago, staff said. The second parcel is owned by Lakeway Plaza Partners IV. Council approved a property purchase Nov. 20 that includes an impervious cover credit under city rules for about four acres the city bought that the owner can use on other owned parcels in the city, staff told council.

Mayor Joe Bain wrote in his most recent blog he expects groundbreaking in January on the $23 million police facility.

The City of Lakeway has chosen two engineering firms to conduct project-related work such as road improvements and designing two park restrooms this year. Council approved the choices of Huitt-Zollers Inc. and Malone/Wheeler at its Nov. 20 meeting. The second firm has already worked on 40 projects for the city, staff said.
The city manager will finalize contract details, city staff told council which this year are estimated to cost between $75,000 and $100,000.