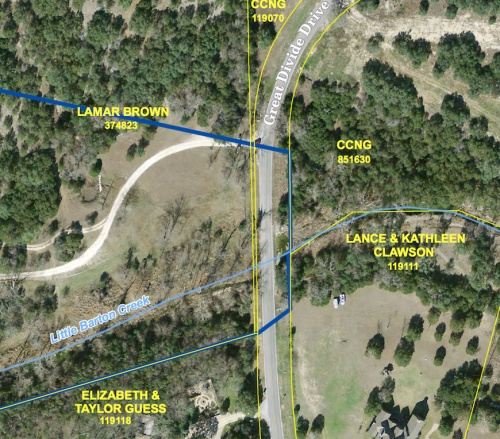 This map shows the low-water crossing over Little Barton Creek that leads to 204 homes in The Homestead. Homeowners are calling on the city to annex the strip of land the crossing is on, to protect the community from a county plan for a bridge.

Homeowners living in the semi-rural community of The Homestead in Bee Cave’s extraterritorial jurisdiction requested Nov. 14 the city annex a sliver of land to protect their community from a county bond-supported plan for a new $4.2 million bridge into their neighborhood over an existing low water crossing.

The proposed span that Travis County voters agreed to fund in the Nov. 7 election as part of a $185 million bond package would replace the 31-year-old crossing on Great Divide Drive, south of Hwy. 71, which is The Homestead’s sole access point.

“It is a neighborhood with a soul. Once I cross the low water crossing, I feel I’ve entered a space unlike the hustle and bustle of the Hwy. [71] just outside,” said resident Kim Nixon in a letter to the council which was read at the meeting.

“People in The Homestead wave to each other and have a support system that is remarkable. That is something money cannot buy and exemplifies the heart and soul of Bee Cave," she said.

Resident Taylor Guess, who owns the first home by the crossing, told the meeting attendees he is concerned about the lack of detail in the bond item.

“Voters passed it without any drawings,” he said. “Are they going to take my land? I don’t know, but I would love if this [Bee Cave] council was in charge. Annex this [land parcel] so you can properly represent us.”

In May, Travis County staff published a ranking of the Great Divide Drive low water crossing listing it as the 5th highest priority stream crossing of 40 in the county, measured as an ongoing threat to public safety based on criteria such as the impact to emergency access and level of roadway flooding. The county report noted one flood-related closing since 2013.

Residents told council the crossing had been closed 14 times since 2009, the longest closing lasting a few hours.

Homestead resident Victoria Winburne was one of a few who spoke in favor of the county’s plan, which county records showed include $843,260 in non-voter approved appropriated funds for a future study or engineering survey. That figure includes a 10 percent cost buffer if and when outside consultants are hired, county staff said.

“We’re looking a gift horse in the mouth,” Winburne told the council. “[I suggest the city of Bee Cave consider] postponing annexation until after the county has done design work. Let them do their job and move forward,” she said.

If the $4.2 million in bond funds (for construction only) are not spent on a replacement structure over Little Barton Creek, they may be allocated toward another item on the bond list, county staff said.

Homestead resident Carrell Killebrew said if a bridge were to go in, it would increase the city of Bee Cave’s exposure to development on large tracts of privately-held lands south of The Homestead which currently have access only via Fitzhugh Road off Hwy. 290.

Resident James Cook told council the crossing is narrow without sidewalks and he would be open to a compromise solution.

“[Let us] come up with something visually nice for the people who want to keep that homey feeling [combined with] something that is safe for all the neighbors,” Cook said.

Travis County Precinct 3 Commissioner Gerald Dougherty, who represents the community, said now that the bond has passed, he plans to see what county engineers can provide him about the bridge project. That could include any preliminary engineering work such as surveys and drawings he can then share at a public forum as soon as mid-2018 to help the discussion on what solution to move forward on.

“We’ve got some time to do this,” he said adding the county will issue portions of the $185 million bond over the next four or five years. “Anything that is considered to be controversial, those things are going to need some time to ferret out the possibilities.”

“It’s not unprecedented. [Securing that county funding] would take a vote of the Commissioners Court. I’m interested in coming up with a solution that would be accepted by [a majority of] The Homestead,” Dougherty said.

Bee Cave City Council will hear further public comment at a second meeting before the end of the year, the mayor said.