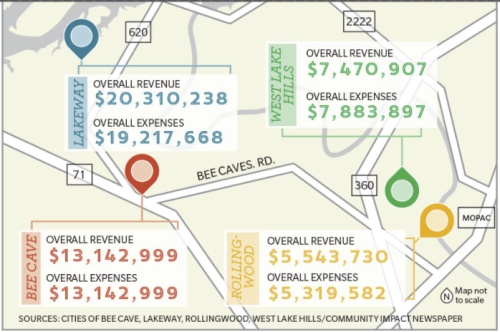 In Lakeway the city’s maintenance and operations tax rate is lower  than last year, although the interest and sinking rate rose to accommodate May’s bond passage for the city’s new police building. The average homeowner will pay $113 more in FY 2017-18year than previously.

The property tax rate in Bee Cave is unchanged for FY 2017-18, but the police budget is up 6 percent.

West Lake Hills increased taxes for the first increase since FY 2015-16. It was the city's second change in the tax rate since FY 2005-06.

Rollingwood also raised the tax rate and is projected to bring in an additional $72,632 of tax revenue compared to FY 2016-17.