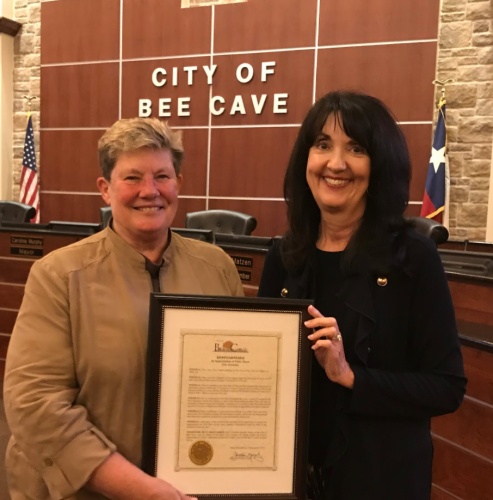 Bee Cave city attorney poses with Mayor Caroline Murphy after being honored with a proclamation for her 15 years service with the city.

Here are three takeaways from the meeting.

1. Council approved on consent an amended FY 2016-17 budget ending Sept. 30 showing a $1.4M surplus. The extra revenue of about $9.65M comes from increases in sales tax, building fees, the library, interest collected and municipal court fees, according to city finance records. Expenditures are about $84,000 over budget year-to-date partly due to increases to salaries, benefits and professional services. Council approved the FY 2017-18 budget at its Sept. 12 meeting, keeping the property tax rate unchanged.

2. Council Tuesday night also approved rezoning to allow for a low-density housing development called Signal Hill Estates to be located on 94 acres of recently-annexed city land owned by Richard Grumbles. The final planned development agreement with the city, approved last month, lays out 61 rural residential sites [each on one acre or more] located on the north side of Hamilton Pool Rd. just east of the Bella Colinas subdivision and south of Terra Colinas.

A second, 34-acre parcel on the south side of the road is also slated for single family housing development but city staff indicated there is no timeline. At the request of Grumbles that was made in 2013, Council approved the annexation of the properties at its Sept. 12 meeting to allow for city services to be incorporated into the Signal Hill project.

3. Bee Cave city attorney Patty Akers was recognized Sept. 26 for 15 years’ service. Akers began working for the City of Bee Cave on August 13, 2002, a city proclamation showed. It read in part, "Due to a tremendous work ethic throughout the years, a sense of compassion for the community and for her clients, as well as her strong analytical skills, Patty has been the recipient of many awards and accolades, including the Lexis/Nexis and Martindale-Hubbell award for ten years of highest possible peer review rating in legal ability and ethical standards."

After the public recognition, Akers immediately resumed her work before council members answering legal questions brought up during the course of the meeting.