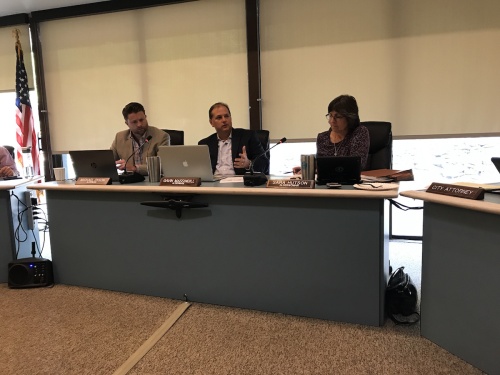 Rollingwood city staff recently discovered Aspergillus mold on a wall near the building’s air conditioning unit, and the police department is currently moving operations into a trailer until the mold is addressed, City Administrator Amber Lewis said.

“We would have to take out the wall that the air conditioner is on,” she said. “All of the porous furniture, the cubicles that have fabric and the chairs would need to be trashed.”

Rollingwood City Council held a special budget workshop Wednesday and a public hearing on the proposed fiscal year 2017-18 tax rate of $0.2089 per $100 valuation. City Council primarily discussed future improvements to the city's municipal building and the makeshift office space inside that houses the Rollingwood Police Department.

The city had previously discussed budgeting $300,000 for 2017-18 fiscal year to renovate the police department space and to convert an on-site storage garage into an office for city utility billing, Lewis said.

That number did not include any action to address the mold, which was identified after the previous budget workshop on Aug. 16. Lewis said the council may want to consider scrapping the larger renovations and creating a new municipal building that is more suitable for the city’s needs. A portion of the funds would go to planning the new facility.

“[The space] was something that was never meant to be an office space, let alone one for our police department, so we need to talk about building a space that’s capable of handling some more staff and a the police department,” she said. Rollingwood Police Chief Dayne Pryor discusses temporarily operating the police department in a trailer due to mold in the municipal building.[/caption]

Police Chief Dayne Pryor said the police department will be moved into the temporary trailer next week and should have adequate space to operate.

“The trailer actually provides more space than we have now so we can function out of that environment for an extended amount of time,” he said. “The space should hold us over and give us time to do the research and make our [renovation] plans.”

Pryor said the challenge is that the mold was a recent development that was not expected in the budget process.

“Whatever is done needs to be done looking at the future because we know what the department’s needs are,” he said. “We need to make sure we don’t [rush this] and in five years have to start over again. We really need to study this before we make a drastic decision.”

Lewis said the city is renting the trailer for $500 a month, and that there was a $1,200 fee to transport the trailer to its current location in the Rollingwood Park parking lot.

City Council is scheduled to set the tax rate and approve the final budget for FY 2017-18 on Sept. 20.
SHARE THIS STORY