No minimum age: trends show young entrepreneurs on the rise in the Lake Travis-Westlake area 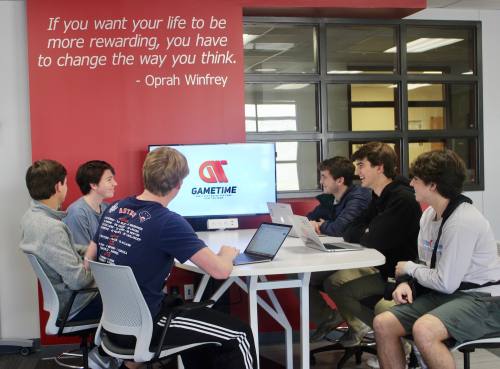 Hudson Yancer, Ben Pankonien, Thad Hutcheson, Wes Mizell, William Barksdale and Reed Senterfitt are Westlake High School seniorsnand founders of GameTime Live, a mobile app allowing viewers to predict upcoming plays in live sports games as they unfold in real time. Finishing at the top of the leaderboard can result in cash prizes, and the app had 830 users as of mid-February. It's available on the Google Play and Apple App stores.

A group of businessmen sat in a conference room on a Wednesday afternoon in mid-February discussing complex issues—how to grow their mobile application user base, invested dollars remaining after product development 2.0 and the establishment of a legal component.

Eventually the bell rang, and the 12th-graders headed to their next class.

Westlake High School is in its third year of offering the INCubatoredu course. Administration learned about it while interviewing and hiring Superintendent Tom Leonard. The program originated in his former district of Barrington, Illinois in 2014 and now has about 100 chapters across the country.

“It takes our entrepreneur course and makes it more dynamic and real-world by having the students create a business,” said Jerri LaMirand, Eanes ISD director of Science, Technology, Engineering and Mathematics.

An old computer lab at the high school was transformed into a collaborative workspace resembling a modern office. Community members helped raise funds to bring in the program, and their contribution since has only expanded.

Locals teach the lessons pertaining to their expertise, including the ideation process, website development, marketing and more. Each student group is also assigned a mentor from the community who checks in once a week. In January, students pitched their business ideas to an advisory board of community members who provided feedback. Each business got $200 to test its idea. In May students will pitch to another board, and the top four teams will compete for a $10,000 reward at a final event.

Last year GameTime Live won the local pitch night and was selected to compete in the national INCubatoredu competition–where it won an additional $10,000 to grow its mobile application.

While the initial course is designed for juniors, part two is for seniors to take the company further. That is what the GameTime Live group is doing; the students own 100 percent of their business and plan to continue it after graduation.

An INCubatoredu program launched at Vandegrift High School in fall 2018.

“The response has been overwhelmingly positive,” course instructor Erin Mathis said. “Students love the class because it is unlike any of their other classes.”

Like in EISD, the Leander ISD community has shown support by volunteering to mentor, coach and judge students and donate funds.

Business and marketing teacher Erin Lucas said the course gives students the chance to explore how the business world can bring together minds from different areas of academics.

“There are students interested in music who are developing a business within the music industry,” Lucas said. “Students interested in sports are creating a sports card subscription business. It is important to open students’ eyes to the fact business is everywhere; we are all good at different things and can work together to achieve a common goal.”

Lake Travis ISD has a Junior Chamber of Commerce in which students volunteer at official Chamber events such as the gala, bingo night and ribbon cuttings. The program gets them outside of school and networking with the business community. Due to real-world exposure and connections, many Junior Chamber students have created and maintained their own businesses, Clarissa Cullison, LTISD teacher who co-sponsors the program along with Lisa Dawson, said.

Hayden Steves, a junior at The University of Texas, has been a Realtor with Redfin Real Estate for two years. He said the Junior Chamber taught him the time-management skills needed to juggle working and school.

“It’s hard to be young and have people take you seriously, Steves said. “You have to work harder than other, older people who have a real estate license to get jobs. When you start out, you have to dress nice and act professional. The Junior Chamber taught me how.”

The Model Entrepreneurs Club at St. Stephen’s Episcopal School was started by students two years ago.

“We saw an opportunity to create a platform at our school where all students, regardless of grade, could learn the fundamentals of business by creating their own mock business and presenting it to a panel of venture capitalists in a ‘Shark Tank’–style format,” founders Edbert Wu and Dan Sabra said. “At first, we weren’t even sure how to start a business or if we would qualify at such a young age, but through the process, we learned that age should not be a limiting factor to our dreams.”

The real magic is it is all-student led, economics instructor and club sponsor Jon McCain said. Students set the agenda, goals and objectives for each meeting.

One idea that stuck out to McCain was a solar hat. He said students created a prototype for a hat that could be worn outside all day, then at night a phone could be plugged into it to charge.

“Sustainability is a big part of our ethos at the school,” he said, adding it is rewarding to see values integrated into students’ businesses.

Trinity Episcopal School offers Innov8, a three-week experience where eighth-graders come up with an idea based on their own interests and nurture a process that goes from design to actuality, said Mark Richards, middle school academic dean.

“Instead of issuing a teacher-directed topic, we wanted to be able to empower kids by giving them the time and structure to take ownership of their own idea,” Richards said. “Until now it has taken a purely entrepreneurial approach, but this year we’re getting them to come up with a service project.”

Students have expressed interest in creating programs and services to partner with the community and address issues such as clean water, animal abuse, the foster care system, natural disasters and the needs of migrant families. Ideas are presented in a one-minute pitch given at a symposium, where guests can also visit the students at their individual booths.

“They’ll have to own what the process will look like and come up with a solution that is manageable in our timeline,” Richards said. “They have to execute the plan.”

Amber Wakem’s 8-year-old daughter has dyslexia and was struggling in a traditional classroom setting. But when she decided to start a business, her math and research abilities quickly strengthened along with life-skills not taught in school.

Noticing this was the self-described “ah ha” moment that led to Start-Up! Kid’s Club. The program has gone from 1 to 13 locations since Wakem launched it in 2017. Students are guided in creating their own business, which they debut at a market event where they sell their product to the public.

“We give them the chance to put the business out in the universe,” Wakem said. “Then afterwards we examine how it went, what worked, what didn’t and what they can do better.”

The process helps students understand the world is not a one-and-done effort, Wakem said. Students get to see in the business universe, it is not common to do well and profit the first time.

“We are able to teach the kids that failure is really just feedback,” Wakem said. “We tell them they didn’t fail; they just found a way that didn’t work.”

The kids spend the following month innovating their business, then participate in a second market to test what additional work can achieve.

Recently, Westlake shop Sanctuary partnered with Start-Up! Kid’s Club to allow interested kids the opportunity to sell their product in a store. About 15 are showcasing products now.

The club also hosted its Pitch Yea! event in January, during which kids sell their ideas on a stage in front of judges for a chance to win prizes and funding. Participation is open to everyone in the Austin area, not just Start Up! members.

Wakem noticed the students’ club time was not always enough for the larger demands of their projects, and soon another idea was born: a coworking space just for kids.

“We started doing coworking takeover events where a business would donate space to us for the day,” she said. “I’d bring in printers, sewing machines and other things kids might not have access to and give them the chance to utilize those tools to build their business.”

Wakem said she noticed the benefits of the space, and now Start-Up! is opening a permanent coworking space in East Austin this spring.

When people counter the Start-Up! idea and say the kids are “only five years old,” Wakem said she likes to respond: “So?”

All kids can do incredible things if permitted, she said. Creating a business teaches them empathy, as well as how to be better leaders and more prepared adults by creating a clearer understanding about the way the world works before they have paid their first bill.

Mace Massingill, who founded the nonprofit #nohunger when he was 7, agrees. Now 11, he said he had to develop strong speaking skills, learn about the process of creating a 501(c)(3) and call a lawyer.

“The lawyer agreed to help me pro bono,” Massingill said. “Which is also a word I learned.”

When he did his first food drive, he was proud of the stack of food compiled on short notice, especially when someone at the Central Texas Food Bank said it would feed 150 people.

“I asked what would have happened if we hadn’t come in,” he said. “The man replied, ‘Then 150 people would be hungry.’”

This bothered Massingill, so on the drive home he suggested to his parents an attempt to feed 1,000 people by Christmas. The family could not have any holiday parties that year, because the living room was filled with enough food to feed 5,000. In 2017, Massingill decided he needed to enlist helpers to keep reaching high goals, so he started the Hunger Captain program, through which he teaches kids his age to run a collection drive for their own local food bank.

There are seven participants reaching as far as Texarkana, and all will work toward the goal of feeding 325,000 people this year.

“When your kid says they want to do something to better their community, support them,” Massingill said as advice to parents. “It may mean extra work for you–because we’re kids and we can’t drive–but it will be worth it. I promise.”