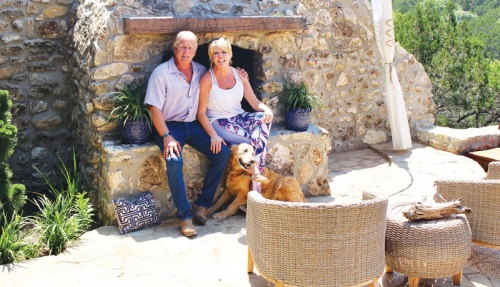 When Jim Madigan met Dawn, he asked her what she wanted to do with her life. She replied, “Help people,” and that is when he fell in love.

Now they are celebrating 27 years of marriage and have launched a new endeavor to raise money for foster care organizations in Texas.

The couple has lived on their 15 acres of land in Spicewood for the last 17 years. They have two children, ages 22 and 16.

“Recently we went to a foundation event that was raising money for the Texas Foster Families Association,” Dawn said. “I immediately wanted to jump in and bring home foster babies to help out, but Jim said we were too old for that.”

Shortly after, though, Jim came back to Dawn with an idea.

“He said, ‘I know what we’re going to do to help,’” she said, “and that’s when Firesong Ranch began.”

The Madigans decided to start renting out the casita on their property and to give a portion of the income to local foster care organizations.

“He’s a builder, and I love to decorate and host,” Dawn said. “We updated and redecorated the casita and added a big deck.”

They had also recently stayed in a “glamping” tent in Wimberley and fell in love with the concept, so they bought a luxury tent and added it to the property as an additional rental.

Dawn said they market the two rentals on Airbnb and on their website, and that it has been a “revolving door” of renters since opening four months ago.

“It feels like we were meant to do something with this property, but we never knew what,” Jim said. “This seemed to be the perfect idea: We can stay here, manage it and keep adding to it.”

The next addition to Firesong Ranch will be a “barndominium,” a barn-style building with a large game room, wet bar and kitchen on the bottom and rooms to rent on top.

“It’s another piece of the puzzle,” Jim said. “It’s all about giving back. We’re starting off with giving a portion, but eventually we hope to let all the proceeds go to foster kids. It’s a progression, but that’s the end goal.”