Spa offers clients a path to wellness via ancient techniques 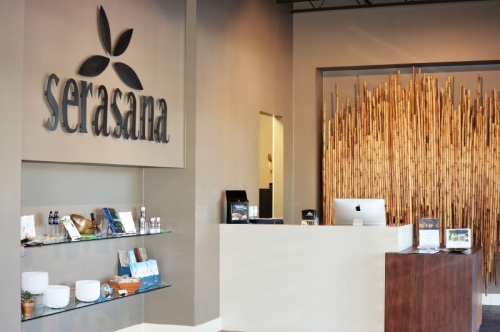 The spau2019s interior is designed to be calming and soothing environment with simple lines and textures.

Since June 2016, Serasana Austin has been providing the Westlake community with acupuncture, massage, yoga and a tea bar.

Located in Davenport Village on Capital of Texas Hwy., Serasana Austin was founded by Patti McCormick and her husband, Bill Gilliland.

“It’s been very successful, and the people in that area seem to be very responsive to what we offer,” McCormick said. “They love being able to come in and have their tea and take their yoga classes and to also be able to get bodywork, acupuncture and massage done all in one place.”

Serasana is set to open locations in Bee Cave and Dripping Springs the spring of 2018, McCormick said.
She began her career as an engineer but decided it was not the right path for her.

“Due to some personal health struggles, I wanted to get more into a business that would help people and especially those who were in health crisis,” she said.

In 2004, McCormick founded Sana Vida Wellness Spa & Tea Bar in Marble Falls. In 2014 she and her husband decided to expand as a franchise and rebrand Sana Vida as Serasana, becoming one of the first registered acupuncture franchise in the U.S., she said.

“Being an acupuncturist myself for 20 years, I completely believe in it and have a passion for it,” McCormick said. “I’ve always felt that if more people knew about it, acupuncture would change a lot of lives.”

McCormick said what separates Serasana from the numerous other spas and yoga studios in the Austin area is “the fusion of the different ancient modalities into one.”

“We try to blend Chinese medicine with the ancient techniques throughout all of our modalities,” she said.

Haley Frank, a 22-year-old University of Texas student, has been undergoing acupuncture for years to treat pain from congenital scoliosis.

“Patti was the one who introduced me to acupuncture, and it really changed my life,” she said.

Frank, who has had three back surgeries, said she tried steroid shots and prolotherapy—injection-based treatment used in chronic musculoskeletal conditions—but they offered only temporary relief. She decided to have acupuncture done weekly, and the pain has been manageable since, she said.

“It’s not about anything cosmetic. It’s about treating the whole person,” Frank said.
SHARE THIS STORY