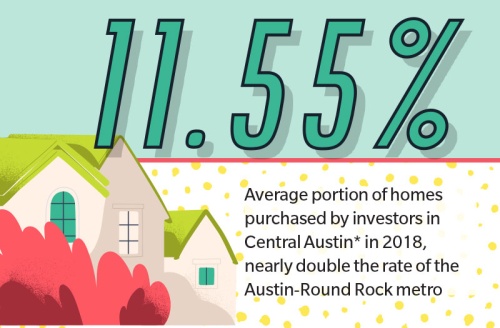 “I am a local home buyer and real estate agent looking to purchase more property in your neighborhood and would like the opportunity to present you an offer,” it reads. “I am not interested in listing your property for sale, just purchasing.”

Mayor Pro Tem Delia Garza, who represents District 2 in Southeast Austin, said she has received similar letters. Some of her constituents get several a month.

“It seems like they’re trying to personalize it that way, but it’s not really the case,” she said. “They are a big investor.”

Local home-flippers have been around for decades. More recently, data shows institutional investors—such as hedge funds, endowment funds and commercial banks—have moved into the single-family market.

In the six Central Austin ZIP codes for which data is available, 11.55%—on average—of homes were purchased by investors in 2018, nearly double the rate of the Austin-Round Rock metro.

Austin homes valued in the $200,000-$400,000 range appreciate much faster than money in the bank, providing investors with a strong return, said Steve Crorey, past president of the Austin Board of Realtors.

Locally, investor activity varies from year to year and across ZIP codes. But the numbers can be significant.

CoreLogic defines low-priced homes based on the distribution of home sales in a given market in a given year. “The cheapest third are starter homes,” a spokesperson said.

This activity impacts the Austin market, where the median home value has increased by more than $100,000 since 2014, according to the Travis Central Appraisal District.

“[Investors] have disrupted the entry-level market … simply because they have created competition and buying potential that the average homeowner or prospective homebuyer can’t compete with” said James Gaines, chief economist at the Texas A&M Real Estate Center.


A new class of asset

Institutional investors—defined as those who own more than 2,000 properties by Freddie Mac Multifamily, a governmental entity that provides loans to acquire or refinance multifamily properties—became involved in the residential real estate market following the Great Recession in 2008.

“Anytime there’s a recession, big institutional investors come in and buy portfolios ... and rent them,” said Dan Castro, a real estate attorney, broker and founder of the local group Investors Underground, which counts more than 15,000 members.

The logic, Gaines said, is that investors purchase foreclosed homes for pennies on the dollar and rent them until their values stabilize, bringing in profit until they can be sold for more money.

Some investors correctly predicted that “tight mortgage financing conditions and greater economic uncertainty” would buoy the single-family rental market, according to a 2015 working paper by staff at the Federal Reserve System Board of Governors.

While the housing market has since stabilized, demographic factors ensure the single-family rental market continues to thrive.

Portfolios of single-family homes have become “a new class of real estate asset,” per the Federal Reserve paper.

“Now we have, literally, across the country, billions of dollars being formed into investment companies … targeting certain markets and going in and buying homes and renting them,” Gaines said.

Institutional investors make up about 1% of the single-family rental market nationally, according to data from the real estate analytics firm HouseCanary.

But those investors have an outsized impact in the metropolitan areas where their activity is concentrated, such as Dallas and Atlanta.

“Austin wasn’t really a big enough market in the beginning,” Gaines said. “[Investors] needed to go into major markets where they could pick up a couple of thousand properties a year.”

Lately, however, investors have become interested in Austin, despite the city’s rising property values and low supply.

“It’s having an impact in the short term,” Castro said. “But in the long term those big companies are not going to be able to compete.”

Unlike individual investors, Castro said, institutional investors accumulate large expenses, which lead to large fees for sellers in distress, and take a formulaic approach—with mass-marketing materials—that pales in comparison to a home visit from a local flipper.

“You can’t duplicate that human compassion, that human touch, that hand-written letter, over a thousand doors,” Castro said. “You can’t scale it the way institutional buyers want to do it.”

Increased investor activity makes a competitive market such as Austin’s even more so.

“They have a right to buy property just like anyone else,” Crorey said. “It does affect the shortage of inventory that potential homebuyers are able to choose from.”

Because institutional investors seek to purchase a high volume of lower-priced homes, they are often competing with prospective homeowners.

But unlike first-time buyers, who typically need mortgage financing to afford a home, institutional investors have access to other forms of capital, such as private equity, lines of bank credit and public bonds, according to the Federal Reserve paper.

“The investors obviously have been competing with the people who would like to buy the home to live in it,” Gaines said. “Generally, they can outbid you … mainly because [the investor] can say to the seller, ‘I can come in and pay all cash and close tomorrow.’”

For homeowners who may be elderly, low-income or behind on their mortgage or property tax payments, such an offer may be appealing.

“When you’re given a cash offer, closing in three days, I can see why that would be very enticing for someone who is in a vulnerable position,” Garza said.

After hearing that constituents were receiving fliers from prospective homebuyers and getting those fliers in the mail herself, Garza sponsored a resolution called Families Not Flippers. Passed in April 2018, it directed city staff to implement an education campaign to help protect homeowners from predatory flippers.

“I’m not trying to control whether a family sells or not,” Garza said. “But if they can sell at a higher price point, which is likely the case if they put their home on the market [rather than sell directly to an investor] ... I want them to get the absolute best value.”