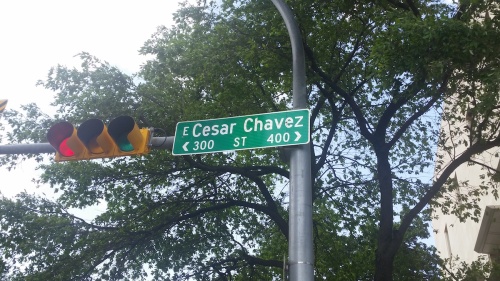 The Spanish phrase Sí, se puede—"Yes, it can be done"—was used as a rallying chant long before it was echoed in the streets of today's protests on civil, worker and immigrant rights.

It was coined by a man named César Chávez during a 1972 fast in which the Latino American farm worker rights advocate protested a signed Arizona bill that denied farm workers the right to strike and boycott during harvest seasons.

Chávez' legacy as a leader among farm workers' unions is honored Friday on what would have been his 90th birthday.

Despite high odds against him, Chávez succeeded in creating the first farm worker union in the U.S., a group that is still active today as the United Farm Workers.

According to Richard Jensen and John Hammerback, authors of The Words of César Chávez, the forthcoming leader quit his job with the Community Services Organization, a group dedicated to grassroots organizing, in 1962 and moved to Delano, California, to start a union among farm workers.

There he faced a challenge that pitted two groups of people against one another: The uneducated, poor, ethnic minority crop pickers versus the wealthy, powerful growers whose dominance held influence at the state political level.

"It was clear from the beginning that Chávez was a unique leader," the authors wrote.

Born in Yuma, Arizona, on March 31, 1927, Chávez was the Roman Catholic son of an auto-repair shop and poolroom owner. He spent his childhood as a migrant, changing schools often as he moved across California with his family. He joined the Navy in 1944 and was discharged in 1946.

My goal has always been very simple,” he said of his public speaking; “Don’t preach to people, try to involve people and get serious."

In The Rhetorical Career of César Chávez, Jensen and Hammerback wrote that Chávez "redefined often-fearful farm workers so that they could act out their courage, dignity, idealism, dedication, and willingness to work hard and sacrifice for their cause without expectation of appreciation or material gain. In turn, these reconstituted farm workers would themselves become rhetors who embodied their message as they educated, persuaded, and at times reconstituted audiences."

Chávez died in 1993 in the small worker town of San Luis, Arizona, according to the Cesar Foundation.

In Austin, the street formerly known as First Street, which runs from MoPac to U.S. 183, was renamed in 1993 to honor the union organizer and Hispanic rights activist who died that year.

Girard Kinney, an architect who helped create the Great Streets Master Plan in downtown Austin, remembers the resistance that came with the name change. Kinney said he was a strong supporter of bringing César Chávez Street to Austin.

"There's always been a valid opposition to renaming numbered streets," he said. "If you say First and Congress, everyone knows intuitively what you're talking about."

Austin isn't the only place to designate the activist's name on a street sign. In Texas alone, roadways in San Antonio, Lubbock, San Juan, Houston, El Paso, Dallas and Edinburg have been renamed after César Chávez. Nationwide, streets in various California and Arizona cities and in St. Paul, Portland, Milwaukee, Salt Lake City, Kansas City and Boise bear his name. The University of Texas installed a statue of Cesar Chavez on its Austin Campus in 2007.[/caption]

The University of Texas also honored the activist with a statue—located at West Mall on a site between Battle Hall and the West Mall Office Building—in 2007.

"The values César Chávez lived by guide us still," Obama wrote in the proclamation. "As we push to fix a broken immigration system, protect the right to unionize, advance social justice for young men of color, and build ladders of opportunity for every American to climb, we recall his resilience through setbacks, his refusal to scale back his dreams."

According to the Texas Comptroller's Office, César Chávez Day is an optional holiday in the state, meaning a state employee is allowed to observe the day.

On April 1 and 2 across various rural communities in the U.S., Chávez' Sí, se puede chant may be heard again, as farm workers are planning marches in his honor.