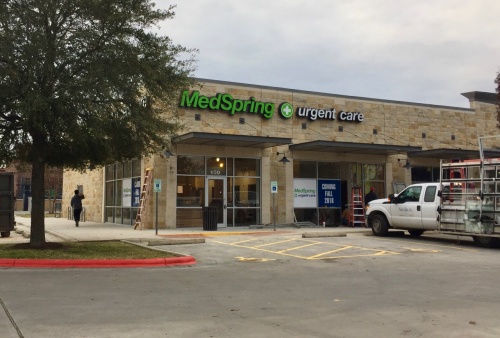 That means urgent care centers in Central Texas that formerly operated under the MedSpring name will now be under the CareNow umbrella.

In Austin, St. David's HealthCare and CareNow are affiliated, so those Central Texas locations will be rebranded as St. David's CareNow Urgent Care centers, according to a July 1 media release from St. David's.

According to the CareNow website, eight of the nine urgent care centers that are now under new ownership will stay open.

Five of those eight locations are in Austin, and other facilities are in Buda, San Marcos and Round Rock.

The MedSpring Urgent Care center at 1335 E. Whitestone Blvd. in Cedar Park will close, according to CareNow's website.

In addition to the MedSpring locations in Central Texas, CareNow also purchased eight locations in the Dallas-Forth Worth area and seven in the Greater Houston area.

According to CareNow's website, opening hours will remain 8 a.m. to 8 p.m., and staff will remain the same at each of the facilities.
SHARE THIS STORY