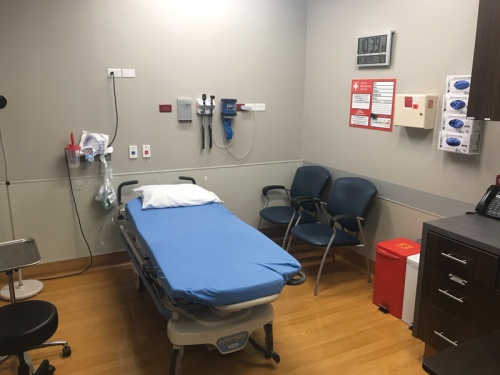 Over $800 in out-of-pocket expenses was not what area resident Lance Kubiak expected to pay after visiting a freestanding emergency department, or FSED, late one night last year.

Kubiak, who has employer-provided health insurance, visited the FSED after experiencing an extended period of nausea and vomiting.

The staff took his blood pressure, gave him medication and fluids non-intravenously and sent him home without further use of the facility. He said he then paid over $100 for a copay followed by a $300 bill and $500 bill over the next few months.

“In total I ended up paying over $800 to basically be given an over-the-counter nausea pill,” Kubiak said.

Kubiak’s experience is reflected in data from a statewide study on FSEDs and urgent care center use in Texas. The study was led by researchers from the UTHealth School of Public Health and Rice University and published in the “Annals of Emergency Medicine” in December 2017.

According to the researchers who analyzed Blue Cross Blue Shield of Texas insurance claims, in 2015 patients in Texas paid on average $763 in out-of-pocket costs at private FSEDs compared to $749 at hospital-based emergency departments and $63 at urgent care centers.

Although they have similar appearances, FSEDs, which were legalized in Texas in 2009, are different than urgent care centers because they are staffed by emergency room doctors and often have equipment such as X-ray machines, CT scanners and full laboratories on-site.

The researchers found the average cost per visit to treat the same ailment at an FSED is nearly 10 times higher than at an urgent care center.

David Huffstutler, CEO of St. David’s HealthCare, said opening FSEDs that are associated with St. David’s hospital network has helped expand accessibility to the emergency services available at hospitals, but they are more expensive to open than urgent care centers.

“Typically the freestanding ED’s are going to be more costly because the cost to operate them is much higher both in terms of capital [investment] and equipment.”

Use of FSEDs in Texas grew by 236 percent between 2012 and 2015, with significant overlap in the diagnoses and treatments administered at urgent care centers, according to the study. In Northwest Austin three FSEDs have opened since 2013.

Patients and lawmakers have expressed concern over a lack of transparency regarding insurance coverage at FSEDs and high out-of-pocket expenses.

A UTHealth health economics researcher from the study, Ellerie Weber, said a question raised after the study’s publication was what the FSED’s profits are.

“Certainly the people that work there think they are offering a service that the public needs and wants, and it’s justifiable,” Weber said. “Therefore the controversy is whether the prices are justifiable. We don’t know what their profits are and if that is a main driver for these things opening.”

In some communities where access to hospitals is limited due to geography or traffic congestion, FSEDs provide access to emergency medical care that was previously difficult to attain in a timely manner or outside of normal business hours.

Huffstutler said having St. David’s operate both FSEDs and urgent care centers that are associated with the hospital network has helped to increase availability of care in areas where traffic congestion or other issues make medical access difficult.

“With Austin’s growth and mobility challenges it’s very important that we bring varying levels of care out into the geography,” he said. “While patients out in these areas may need emergency care, it will never make sense to go into that area closer to their home and build another hospital, at least until there’s a lot more growth.”

“Urgent care centers are really intended to care for more minor illnesses but certainly in a convenient setting,” he said. “We’re talking about things like colds and flu strains, sprains, burns, lacerations, flu-like symptoms and those types of things.”

FSEDs, Huffstutler said, are designed to treat more traumatic injuries and illnesses. He also said patients should be aware of the difference between FSEDs that are associated with a hospital network and those that are not owned by hospital groups.

Huffstutler said nonhospital-affiliated FSEDs do not have to adhere to the same types of regulations that hospital-based FSEDs are subject to and also may not cover all insurance plans, which can lead to higher bills.

Each FSED may approach billing processes differently, said Lisa MaGruder, marketing director for an Austin-based FSED, Austin Emergency Center, which has a location at US 183 and Anderson Mill Road and one on Far West Boulevard. She said Austin Emergency Center has a patient advocate on call to handle billing disputes.

“That is something unique that we have that other freestanding EDs don’t. The patient advocate is a person that is 24/7 on call for billing problems and to answer questions,” MaGruder said.

In the wake of studies and complaints highlighting a lack of transparency in the billing process at FSEDs, state Rep. Tom Oliverson, R-Cypress, introduced and passed a bill during the 2017 Texas legislative session requiring that FSEDs make billing practices clear to patients.

The bill became effective in September and requires that FSEDs provide information about which insurance plans the facility is in-network with both on its website and in writing at the facilities.

Weber said that regardless of future policies or legislative changes patients should learn about the different types of medical facilities.

“The takeaway for patients is that you should educate yourself to the best extent possible,” Weber said. “[Patients should] really understand if this facility is going to be covered by your particular insurance and if this is something that can be treated elsewhere.”

Although Kubiak said he has gained a stronger understanding of the billing practices at FSEDs, he said he worries about the next time he needs medical attention without access to an urgent care clinic.

“Honestly after the last incident I’ll probably just wait it out, or if it gets really bad just call an ambulance,” Kubiak said. “If I am going to incur the same costs I would taking an ambulance to the ER, within reason, it’s not worth taking myself to a clinic and overpaying for a service.”