For Austin Marathon medical director, preparedness is everything 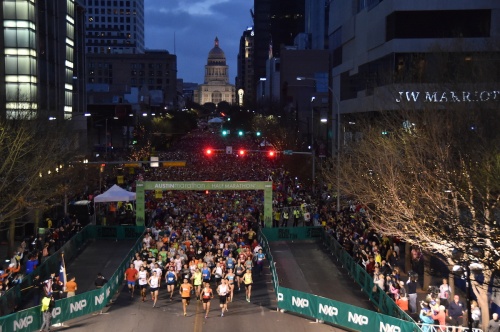 The 2017 Austin Marathon is Sunday. This Sunday, Dr. Martha Pyron will get to the Austin Marathon finish line at 6 a.m. to make sure as many as 15,000 runners have access to medical help.

She'll stay until the last of the runners has crossed the finish line—the 26.2-mile race begins at 7 a.m. and closes at 2 p.m.—monitoring the athletes and assessing injuries, from a simple blister to a broken bone—or worse, a heart attack.

"The vast majority of the people that come into the [medical] tent, it's [for] something minor," Pyron said. "The issue is really planning for when those 5,000 people come across in that one hour period of time. We're probably going to have two people a minute coming into the medical tent."

As the new medical director for this year's Austin Marathon, Pyron's job is to assess any risks runners may face during the race—from an unsafe pothole along the course to having enough cots at the medical tents—and lowering those risks.

Most of the planning is done in the weeks and months before the marathon starts. During this time, Pyron, who also owns the sports medicine facility Medicine in Motion, recruited almost 100 people with medical training to work the marathon, assessed where to staff them along the marathon and half marathon routes and made sure she had the adequate medical supplies on hand for race day.

To determine all of this, she looked at data from past Austin marathons—everything from what time runners crossed the finish line to how many runners sought medical attention and what type of attention they needed.

Pyron said being at the finish line is crucial because that's when most people give their final kick, depleting their energy and then abruptly stopping—something she doesn't recommend.

She'll have staffers stationed at the finish line specifically to catch people as they cross. Most of the time, Pyron said runners are simply dehydrated, have a muscle cramp or need to cool down with an ice bath or some cold towels.

On rare occasions—Pyron estimates there will be a .05 percent chance of occurance—a runner can get a heart attack when he or she finishes the race. Pyron said she'll be ready if that happens.

"When something like that happens, I'm in total work mode," she said. "It doesn't stress me at all."

This isn't the first time Pyron has been in charge of a large group of athletes' medical needs. She's also medical director for the Austin Ironman and has been directing other major sporting events and tournaments since 1999.


"The issue is really planning for when those 5,000 people come across [the finish line] in that one hour period of time." —Dr. Martha Pyron, Austin Marathon medical director

An athlete herself, Pyron is board certified in family and sports medicine. She obtained her medical degree from The University of Texas Health Science Center in San Antonio, completed a residency program in family medicine at Southern Colorado Family Medicine and pursued a fellowship in Sports Medicine at Michigan State University.

Pyron predicts 150-500 runners will need medical attention at some point throughout the day Sunday, depending on weather conditions.

For a healthy and hopefully injury-free race day, she suggests runners take one aspirin the morning of the race. She said that may help prevent heart-related issues during or after the race.

She also suggested runners not vary from their training significantly.

"If you really push yourself much harder than you ever have, then you're going to have an increased risk of an injury," she said.

Above all, she said she wants runners and the supporting crowd to have fun.

"It's very safe," she said. "There are lots of people that put the time into making sure they have a fun day."