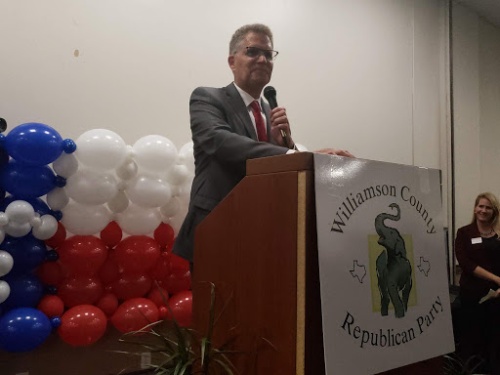 "There is a reason why (people) move here," Gravell said in his acceptance speech. "It is because (Williamson County) is a place for jobs and we offer prosperity and we offer a place to work together to make a difference."

Republican Bill Gravell was holding his lead against Democrat Blane Conklin and independent Bill Kelberlau in the race for Williamson County judge, according to unofficial results posted 11:25 p.m. Tuesday.

Williamson County Republicans are watching election returns tonight at the Wingate by Wyndham Round Rock Hotel.

"People are voting, and we're either going to win tonight or we're going to lose,” Gravell said after early voting results were released. “[Republicans] have won a lot in this county, but we've also lost. So we'll just need to see when the Election Day votes are counted, but when they come in I’ll let you know.”

Republican Bill Gravell leads Democrat Blane Conklin in the race for Williamson County judge with the two candidates separated by just over 7,400 votes out of 156,591 ballots cast during early voting, according to unofficial returns released Nov. 6.

The three candidates are seeking to take over for outgoing Williamson County Judge Dan Gattis, who plans to retire after his current term ends at the end of the year.

The county judge is an executive position that acts somewhat like an elected CEO and is involved in nearly all aspects of county government. Judges are elected to a four-year term. Key responsibilities for the judge include preparing the county’s budget and presiding over the elected county commissioners court. The judge also serves as administrator of county departments and senior department heads.

Gravell is the Precinct 3 justice of the peace in Williamson County.

Conklin is a senior analyst in employee benefits at The University of Texas at Austin.