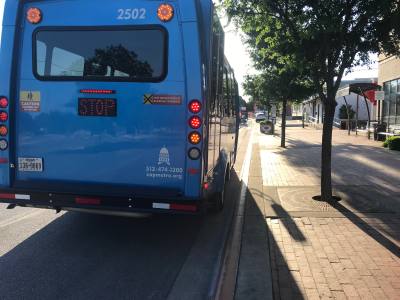 A GoGeo bus waits at a bus stop in front of the Georgetown Public Library.

More people are riding GoGeo as the bus system continues its second year in service, but total ridership and the cost of service remain well below performance targets, according to data shared recently with Georgetown City Council.

GoGeo launched in Georgetown with four bus routes on April 21, 2017, through a service agreement among the city, Capital Metro and the Georgetown Health Foundation.

The system saw a 21 percent increase in overall ridership between October 2018 and February 2019, compared to the same five months one year ago, according to GoGeo data.

Despite the increase, GoGeo tallied 8,258 total riders in the first five months of its second year in service, leaving a steep hill to climb to meet an annual performance target of 40,000 riders. During GoGeo’s first year of service, the system’s four routes had 22,755 riders, or about 57 percent of the annual target, according to city data.

City Council and the Georgetown Health Foundation are expected to decide within the next 12-18 months if their shares of funding for GoGeo’s service will continue beyond 2020. The city is also exploring other public transportation options, including publicly subsidized partnerships with ride-hailing services such as Lyft or Uber. Aside from ridership numbers, GoGeo is also struggling to meet an annual cost per passenger target of $12. None of the system’s four routes came close to that target during GoGeo’s first year in service, according to city data.

“The ridership numbers are way off [the performance targets],” City Council Member Steve Fought said during a March 26 policy workshop. “The argument of people opposed to this was that we don’t have the population density to do this. That’s looking like a credible argument.”

Although GoGeo has seen a recent uptick in riders, Fought said he worried the system was “on shaky ground.”

“I love to see it growing. I’m glad there’s a lot of people using it; I’m impressed with the paratransit. But those numbers are bad,” Fought said.

Mayor Dale Ross said that while he has doubted whether GoGeo would prove viable within its first three years, he believes Georgetown needs a robust public transportation system, including one that looks at city-subsidized programs for residents to use ride-hailing services such as Lyft or Uber.

“I think we need a paradigm shift,” Ross said. “These numbers here are not pretty numbers.”

Council Member Tommy Gonzalez said thought would need to be given about how residents who ride and depend on GoGeo’s bus routes would be affected by any future changes.

“These folks who are dependent on this bus service—once you get a service, it’s very hard to pull it away and not give it to them,” Gonzalez said. “I don’t want to leave those folks who are using the bus system now in a gap.”

Council Member Anna Eby said smaller changes to existing routes should be considered before making broader changes or doing away with the buses altogether. She also said the city should seek feedback from GoGeo riders.

“Just in looking at the data, it seems to me that one of the issues is the routes themselves,” Eby said.

Small changes to routes are possible, but changes that affect more than 25 percent of a route or the GoGeo system as a whole must go through a formal process that includes public input, according to the city.

Larger changes also have to be coordinated with Capital Metro and align with the agency’s timeline for route changes, which generally occur in January, June and August each year, said Ray Miller Jr., the city’s transportation planning coordinator. GoGeo’s $844,194 budget for fiscal year 2018-19 includes $378,811 in funding from the city, $265,383 in federal funding provided through Capital Metro and $150,000 from the Georgetown Health Foundation, which is providing grant money to GoGeo for its first three years in service. The foundation also contributed $50,000 in matching funds to help pay for part-time use of a paratransit vehicle, according to the city.

Although GoGeo’s ridership has room to grow, Pukys said getting the buses up and running was a positive step.

“I think the launch of the system is an accomplishment in and of itself,” Pukys said.

Existing GoGeo service has some limitations, she said.

Routes do not reach every area of the city, and the structure of a system with fixed routes and bus stop locations can hamper its ability to serve a variety of riders’ needs, Pukys said.

Pukys said the foundation expects to start conversations with the city before deciding whether to continue providing funding to GoGeo.

A future partnership will depend on how the city plans to grow its public transit infrastructure, and whether those plans serve the foundation’s target population, Pukys said. She added that the foundation will also look at how the city responds to riders’ concerns and suggestions to improve the bus system.

“We are going to need to have those discussions with the city,” Pukys said. “To me, it’s ultimately about: Is the system allowing people to have the quality of life that they want, and without it, would that quality of life be diminished?”

Miller said service changes under evaluation by city staff as well as representatives from Capital Metro and Capital Area Rural Transportation System, or CARTS, which operates as GoGeo’s service provider, include alterations to the Orange and Blue routes that would bring bus service through Southwestern University and into the existing and future development around Wolf Ranch Town Center.

Officials are also looking to install a new shelter and sidewalk near the Walmart store located along Wolf Ranch Parkway, which is one of the busiest stops across GoGeo’s routes, according to city data showing the number of rider boardings at GoGeo stops.

City Council will likely receive another update on GoGeo this summer, Miller said.