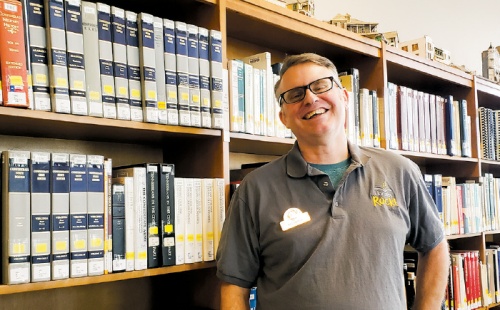 Eric Lashley has been director of the Georgetown Public Library since 2000.

Eric Lashley took over as director of the Georgetown Public Library in 2000 and since then has transformed the facility from a warehouse of books into a community center, creating programs that few other libraries in the country offer and earning national recognition along the way.

Lashley spoke with Community Impact Newspaper about the recognition, the programs that make Georgetown’s library special and his experience as a librarian in an increasingly digital world.


What is your favorite part about working in Georgetown’s library?

Dealing with the people, and it’s never routine. Usually someone will walk in my door and ask me questions, and I try to figure out library services [and] how we can do things better. You are really a part of the community here, and the library is really a focal point for the community, so you really get to meet some interesting and wonderful people. It’s a great job; it really is.


Why are libraries necessary in today’s increasingly digital world?


What are some of the biggest challenges facing libraries in an age of technology?

The biggest challenges are that we’re never going to have the greatest, fastest. We’re always going to be a little behind just because we don't have the resources to keep up with technology. But again, technology is just a tool and were still dealing with people. Even [with] social media like Facebook or Twitter, were still interacting with our customers, our patrons. We still have to do that.

The real honest answer is that we got a grant from the [Institute of Museum and Library Services], and they had done a site visit. When the staff member from the IMLS came and saw our bookmobile, our children’s programs, our social worker, all the stuff we were doing, they were just blown away. After the interview the staff member said, ‘This is one of the best, if not the best public library I’ve ever seen in Texas. You need to consider applying for the national medal.’


What does the honor mean for Georgetown and its residents?


What is something residents might not know about the library?

We have over 60-some patrons that cannot leave their homes. They have medical issues so we do home delivery, and we spend time with them. We talk to them, and most people don’t even know we have this program. We have staffers that go out to people’s homes and deliver books [and] talk to them. That may be the only social interaction those people get. To have that level of service, it just floored the state library, and they kept saying, ‘How do I get other libraries to do what you’re doing?’ My answer is that you hire the right people. You have the right staff that cares about their community, that they are so empathetic and sympathetic, and they really want to serve. They have that public service mentality.


What’s something you know today that you wish you knew when you first started at Georgetown’s library director?

Leadership is not management. I think when I started 20 years ago, I was a manager. I do the schedule. I tell you what to do. That’s just outdated. Leadership, setting a goal [and] saying this is our [goal]. I don’t know how we're going to get there, I don’t care how we get there, but this is where we’re going. Setting direction, setting goals and then, you know, hiring the right people to do the job and giving them the equipment and the resources, they need to complete it, that’s a different mindset. ... It sounds weird to say I’m a leader, but leadership is more of what I do. I wish I knew more about leadership 20 years ago.


What’s next for the Georgetown library?

A version of this article will appear in our August issue.