Georgetown owes the Electric Reliability Council of Texas an estimated $45 million in energy costs incurred during the February winter storm that nearly caused the state’s energy grid to collapse. To pay for it, the city will issue $47.8 million in debt.

As of press time, Georgetown is expected to pay an estimated $44.8 million by April 1 to ERCOT through Shell Energy for energy purchased from Feb. 16-19.

During a March 2 special meeting, City Council approved the city’s plan, which includes a revenue bond issued over 10 years. Then the city will use the existing power cost adjustment, or PCA, of $0.01375 per kilowatt hour currently charged to Georgetown Utility Systems customers to help cover the cost of the bond as it is paid back over time. The annual debt payment for the bond is about $5.4 million, officials said. 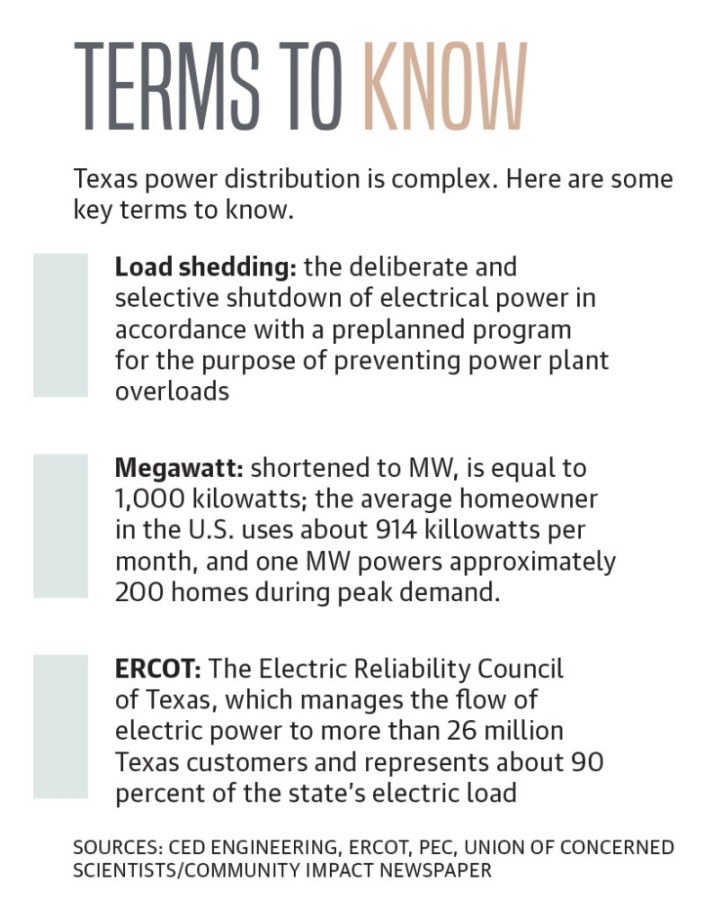 To put it into perspective the energy cost of the winter snap, the city budgeted $60 million for power expenses for the budget year. In less than a week, it spent approximately $45 million, or 75%, of that amount. During the winter peak in 2020, the city used 91 megawatts. In 2021, that jumped to 134 MW for GUS. A megawatt is equal to 1,000 kilowatts. The U.S. Energy Information Administration notes that the average homeowner used about 914 kWh per month in energy in 2019.

While city officials said they have set a plan in place, they hope potential legislation could help alleviate costs.
RELATED STORIES

• 9 Asian-owned eateries to support in Georgetown

• 21 camps happening this summer in Georgetown

• Georgetown moms reflect on work-life balance in a pandemic

“I would hope that there is some quick action at a higher level because there we’re not the only utility in the state of Texas that is facing these kinds of issues,” City Manager David Morgan said. “I’m not aware that there are many that aren’t facing this type of issue.”

Texas energy runs through a centralized, single unit, or bucket, managed by ERCOT, which is responsible for ensuring there is enough supply generated to meet the demand, according to ERCOT.

Customers pay power providers to procure enough power to service their customers at any given time.

Power providers—either municipal, privately owned or through a cooperative—then purchase power from generators, including solar, wind, nuclear, gas and coal, via contracts. Produced power is then sent to the single ERCOT bucket, which is then eventually distributed to customers, ERCOT said.

While Georgetown purchases mostly renewable energy, city officials note that all power generators failed whether they were renewable or not, and it was not the city’s dependence on renewable energy that caused outages in the city.

GUS has four contracts for a combined 325 MW of energy. City General Manager for Electric Utility Daniel Bethapudi said Georgetown’s power contract performed at full capacity, or what it contracted was provided, but the freeze caused a higher demand in needed power. This resulted in a 20% increase in needed demand than regular winter weather, Bethapudi said.

This was happening simultaneously with other providers across Texas all trying to gain access to more power, which further stressed supply. With supply dropping, ERCOT requested load shed—the deliberate shutdown of electric power in a part or many parts of its system when energy load exceeds the generation output—at more drastic rates as hours passed, leaving power providers to determine which lines to turn off and on and when, Morgan explained.

Morgan added that as load shed requests changed, so did the formula for which lines to keep off and for how long, making it difficult for the city to provide exact disruption times.

GUS also had to save protected circuits for hospitals and essential infrastructure such as water and wastewater treatment plants so they did not fail and cause further issues, Morgan said.

Officials said if customers continued to have power throughout the weather event, it was due to luck based on distance to essential infrastructure and if they were connected to that critical line.

“There are certain lines that are protected lines. We could have catastrophic failure in the system itself, and it can ripple out across, beyond our just own electric utility if that’s not protected,” Morgan said.

The required load shed was to bolster the Texas power grid that was less than five minutes from a total blackout, ERCOT officials said.

This was because the ERCOT’s single unit, or bucket of power, is only able to function below the dire-emergency threshold of 59.4 hertz for nine minutes before a statewide blackout is imminent. The power supply dropped below the trigger point for a combined four minutes and 23 seconds.

“Utilities like Georgetown, we were limited in our ability to rotate the outages due to the magnitude of [electricity] that was required of us to shed and the number of circuits that had critical loads,” Bethapudi said.

What will the bond pay for?

The debt the city owes will be paid through a bond. The total $47.8 million bond is broken down into two separate costs: the cost to purchase additional energy and the cost for ancillary services, which are charges for reserve or on-demand power supply, Bethapudi said.

During the storm, Georgetown used about 16,000 MW of power.

While 80% of GUS’ needed power was covered at the previous rate, the remaining 20% was subject to the price increases, he said. Broken down, about 13,000 MW of used power was charged at the lower rate, but the additional 3,000 MW was subjected to the $9,000 price tag, bringing the total to about $27 million.

In addition, the city needs to pay for ancillary services, which Bethapudi estimated will be about $17.8 million. For perspective, the city paid $710,000 in ancillary costs for all of 2020.

“In that one week, we incurred 25 years’ worth of ancillary services costs,” Bethapudi said.

This brings the total to an estimated $44.8 million in power costs.

By issuing the debt, city officials said they believe they will be able to cover the cost of the purchases over time without placing the burden on customers.

“Even as we got word on the exorbitant cost of energy while we were in the middle of the disaster, our focus was delivering electricity to our customers and controlling the variables we could,” Mayor Josh Schroeder said in a news release. “Another variable we have some control over is the burden placed on Georgetown electric customers as a result of this event, and the steps we took [March 3] will mitigate additional costs for our customers.”

Officials said the bond will not increase customers’ rates due to the storm over that period but warn that the while the PCA will not change due to the storm, other future events could cause the rate to change.

If a customer sees a higher-than-normal electric bill, it is not due to a rate or cost increase, but rather due to increased use, officials said. 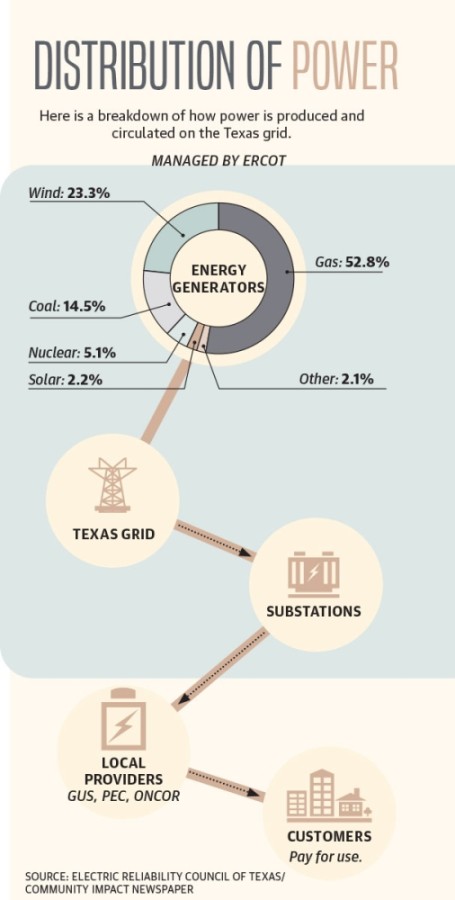 The city is also pursuing a surety policy, similar to an insurance policy, to cover an additional $6.4 million in reserves, which will be required to maintain debt service coverage ratios after the costs from the winter storm are paid. The one-time, up-front payment for the policy will be made using existing revenue, officials said.

Schroeder said he and city staff were aware of the spike in prices and impending financial issues, but it had “no bearing on [their] desire to keep the power on for the community.”

“There was never any question that we were going to do everything we could to keep the power on because people’s lives were at stake,” Schroeder said.

Morgan added the city will also likely face other expenses due to the storm, including overtime pay for staff, contracting with companies for tree limb pickup and others.

GUS is not the only provider facing financial burdens from the storm, as other entities across the state also continue to grapple with considerable fees, city officials said.

There are also two other energy providers in Georgetown—Oncor Electric Delivery and Pedernales Electric Cooperative. Some customers may have the option for only one provider while others may have two or three based on where they are located.

“This is not just a Georgetown issue,” Morgan said. “It’s a statewide issue. You’re going to find this in almost every aspect of the energy industry in Texas.”

Representatives from the PEC were not forthcoming on exact dollar amounts they may be facing following the storm, but spokesperson Mike Viesca said in a statement its financial health remains stable despite the event as it continues to examine the storm’s impact.

He added PEC remains confident it will provide rates and power supply agreements that can help protect members from the volatility of the market.

Oncor, as a retail electric provider, does not charge customers but simply provides the service.

State Sen. Charles Schwertner, R-Georgetown, said in a news release the failures of the power grid during the storm can be boiled down to three major issues—oversight, communication and coordination.

On communication, Schwertner said while oversight entities such as PUC and ERCOT have alert systems in place for common weather events like hurricanes, they do not have a well-developed system for winter weather events.

“The disaster that occurred during this polar vortex was equivalent to a Category 5 hurricane hitting every county in Texas at the same time. However, agencies, electric utility and natural gas providers, and the general public failed to recognize, prepare for, or take this event as seriously as they would have if the impending dangers had been properly communicated,” he said.

Third, while the state has a singular power grid, each oversight entity works in silos. Schwertner said the state’s static approach to coordination led to a disconnect between industries at a time of crisis.

As of press time, a decision from the state had not been made public.

“The bottom line is the Texas power system failed its citizens. This can never happen again,” Schwertner said. “As legislators, it is our responsibility and duty to correct the errors in the oversight, communication and coordination that allowed for such a tragic event to unfold.”
Georgetown Texas Winter Storm 2021 Georgetown Utility Systems Electric Reliability COuncil of Texas City of Georgetown Pedernales Electric Cooperative oncor
SHARE THIS STORY