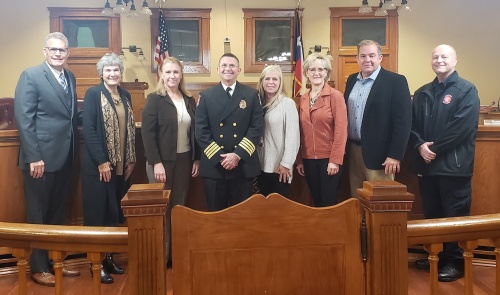 Jones was named the successor of the county’s first marshal, Marty Herrin, whose retirement was accepted by the court Oct. 29. The position is a two-year term.

Jones began his fire service career in 1991 and has been with the city of Georgetown since 1998, said Chris Connealy, the senior director of emergency services for the county.

Jones has worked as a paramedic, a firefighter and an arson inspector, among other fire-related positions, Connealy said.

“[Jones] has a number of credentials in his career that puts him in a great position to not only be fire marshal but special operations,” Connealy said.

The office was designed to provide residents and visitors access to a regionally coordinated set of standards for specialized planning, enforcement and emergency response by assisting the local responders when needed, according to the county website.

The office is responsible for conducting fire investigations throughout the county, as well as providing fire prevention programs, hazardous materials response, swift water rescue and county resource coordination, among other responsibilities, the website said.

In June 2018, the Commissioners Court adopted the 2015 International Fire Codes for the unincorporated areas of Williamson County, it said.

The commissioners will not hold court Nov. 12 following Veterans Day on Nov. 11.