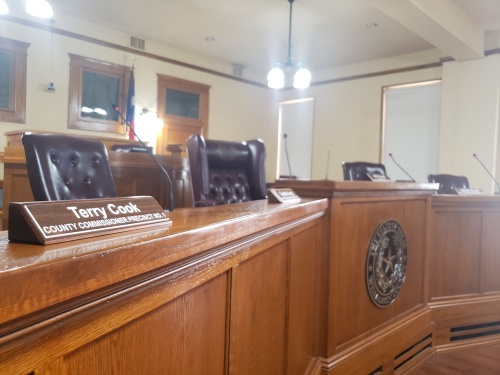 The Williamson County Commissioners Court hold its meetings every Tuesday at 9:30 a.m. at 710 Main St., Georgetown.

Williamson County voters can vote for or against two propositions Nov. 5. The propositions are divided into roads and parks projects to be completed throughout the county.

The ballot reads: (Proposition A) The issuance of $412,000,000 of bonds by Williamson County for the purpose of construction, acquisition by purchase, maintenance and operation of graveled or paved roads including but not limited to constructing, improving, extending, expanding, upgrading and/or developing roads and state highways for transportation related improvements.

(Proposition B) The issuance of $35,000,000 of bonds by Williamson County for the purpose of construction, improving, renovating, equipping, and acquiring land, buildings and facilities for park and recreational purposes.

What it means: The county is seeking voter authorization to issue bonds to finance 13 countywide road projects and nine parks projects. Rising home values in Williamson County mean property owners may see their taxes increase next year even though the Williamson County bond package does not include an increase to the county’s property tax rate.  If passed, the listed projects must be completed, but there are additional road and parks projects for which the money could be used to complete.

Correction: The costs associated of Proposition B projects has been updated with most recent numbers.
SHARE THIS STORY