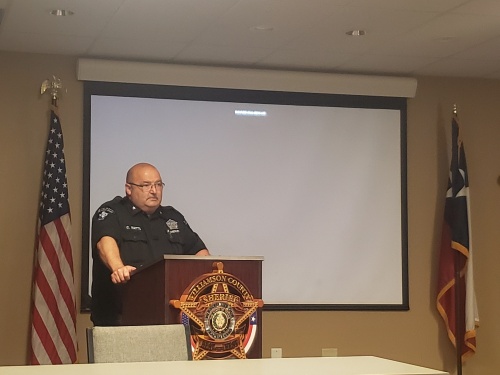 The Williamson County Sheriff’s Department shared a one-year update on its participation in the U.S. Immigration and Customs Enforcement 287(g) program Sept. 25. The county joined the program Oct. 1, 2018 and is contracted to continue through June 2020.

“The benefit is, you identify a criminal here illegally and keep them off the street,” said WCSO Commander Chris Watts. “It helps keep the community safe—it’s one extra layer that we have available to us to make sure that happens.”

The ICE program gives state and local agencies like WCSO the authority to place detainers on arrested individuals in their jails if the individuals fail to prove legal status in the U.S., Watts said.

Watts said all offenders who are arrested and booked at the jail are screened for immigration status. Following a series of questioning, individuals believed to be in the country illegally are designated and reported to ICE, he said.

In addition, the WCSO has no authority to issue detainers to individuals not brought into jail for another crime, Watts said. For example, Watts, as a WSCO employee, cannot go on patrol with ICE or other law enforcement and issue detainers, he said.

The program allows only for the WCSO to issue detainers and notify ICE of potential undocumented immigrants. All immigration status issues are handed off to and addressed within ICE, Watts added.

“Only offenders who have been arrested and brought into the jail are screened for immigration status,” Watts said. “They are already in jail for a current charge … they’re not here for possible ICE detainment.”

Watts said ICE provides all of the equipment needed to fulfill the county’s portion of the agreement as well as an intensive training course. He added that the program is no additional cost to the county.

Williamson County is not reimbursed for its participation in the program, and additional workload is folded into the duties of the designated immigration officer position, Watts said. He added that on average, a detainer takes about 1.5 hours of work to be filed. Therefore, approximately 600 hours of work have been put into the program by the department.

Watts said there are 15 DIOs who rotate to cover shifts 24/7.

WCSO is the only department in the Austin area in the program, said Dorothy Niles, 287(g) Program Manager for ICE. Of the 80 active ICE partnerships in the country, 25 are in Texas, she added.

Participation in and continuation of the program is at the discretion of the sheriff, Herrera-Niles said. Williamson County’s sheriff is Robert Chody.