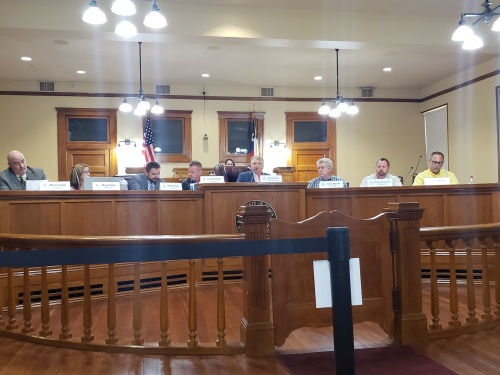 The Williamson County Citizens Bond Committee unanimously voted to recommend a roads and parks bond to the county's Commissioners Court during a June 6 meeting.

The CBC approved recommendation of a $573.3 million roads bond and a $67.6 million parks bond.

The money will go toward at least 65 projects, including flood mapping, right of way purchases and low-water crossing protection.

"Are we going to be proactive or are we going to react?" committee member John Marler said. "What we see in Travis County is a county that reacted to the growth that is happening, and now they can't do anything; they have built themselves into a box that cannot grow. We have gone out and tried to prevent [Williamson County] from falling into that trap."
The CBC is made up of nine members including Chairman David Hays, Meg Walsh and Mitch Fuller for Precinct 1, Joe Bob Ellison and Matt Powell for Precinct 2, Tim Lear and Marler for Precinct 3, and Ron Randig and Bryon Brochers for Precinct 4.

The CBC was tasked with making a recommendation to the Commissioners Court as to whether a roads and parks bond should be called in November and if so, to what scope and which projects should be considered. The commissioners will make a final decision on whether to hold a bond election in November.

"It was really a high-performing, cross-functional team in that we all didn't have an agenda in terms of our area but really looking at the overarching of what can we do for our folks of Williamson County now but also in the future," Walsh said. "[We took] into fact that not only do we take care of people here now but also address the growing community and make sure that people are safe and can get from point A to point B."
The recommended road projects are as follows:

"We talk about transportation; we talk about safety for our citizens, [but] we also need to preserve opportunities for recreation," Brochers said. "We preserve opportunities for land we've been placed with to keep it and maintain it in its natural state, ... so I think it's equally important that we make sure we maintain our lifestyle and our heritage."
The recommended park projects are as follows:

Land acquisition for parks and trails

Editor's note: Some of the presented values are rounded up or down for clarity.
SHARE THIS STORY