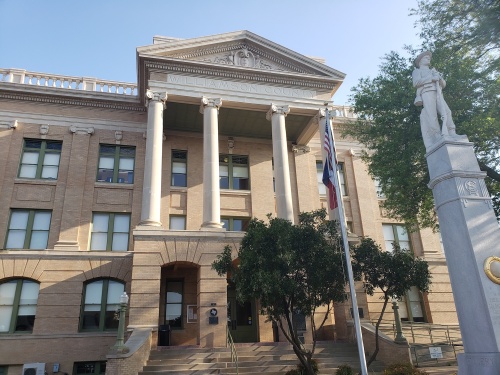 Williamson County Commissioners Court meets most Tuesdays at the county courthouse on the Square in downtown Georgetown.

The county will be moving away from iVotronic, touch screen and paperless machines that keep results within the machine itself until they are extracted at the end of election day. The county first purchased iVotronic in 2005 and has been using the 980 machines since, Williamson County Elections Administrator Chris Davis said.

The new process will be split into two separate machines—one for making selections and a second for counting results.

The county will purchase 800 ExpressVote ballot-marking devices at $3,325 each, or $2.66 million. These machines will have a touch screen as well, but before casting a ballot voters must insert a blank paper given to them by poll workers; then they can select candidates and print the results on the paper. The machine does not keep any record of what selections are made, Davis said.

Voters will then walk to a second machine and insert their marked ballot, completing the voting process, Davis said. The second machine—DS 200—tabulates the results, he said. The paper ballots will remain locked in the second machine in case a time comes when a result is contested and a recount necessary, he added.

Davis said this new process is beneficial because it not only creates a paper trail for voter peace of mind, but it also requires fewer ballot-marking machines since they do not maintain any results and can be used multiple times. Currently, machines cannot be used multiple times because votes are stored on the machines themselves and in order to be reused, they must be zeroed out, therefore losing all the votes.

“That is a big deal because one of the reasons why we were close to 1,000 machines on iVotronic devices was because we couldn’t reuse a machine in early voting and election day,” Davis said. “We had to have separate sets by necessity.”

The new machines are also expected to save time in tabulating results because poll workers will only have one or two machines to extract results from rather than an upwards of 25, Davis said.

Davis added while the new process requires more steps for the voter, he believes the 86th Texas Legislature will make it mandatory through Senate Bill 9 for machines to produce paper ballots by 2024. Davis said by planning for this legislation to pass, the county would not have to scramble to buy acceptable machines.

“It was our hope to have our county avoid all that,” Davis said.

The county intends to have the new machines in by June to begin the setup and installation process. The machines will be ready for use by the November 2019 election to give voters time to get comfortable with the process ahead of the 2020 election, Davis said.