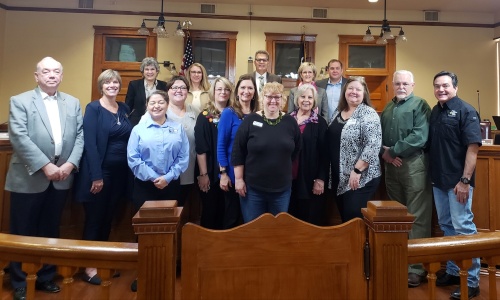 “Our mission [was] to address the unmet flood recovery needs of homeowners of Williamson County in an effort to provide a safe, sanitary and functional dwelling,” McClellan said.

Floods in May 2015 left many Williamson County roads damaged or closed as well as residents displaced from their homes. At that time, the county declared a state of disaster because of severe thunderstorms and flooding that began May 8 and extended through Memorial Day weekend. The floods caused $7 million in damage to county infrastructure and facilities, county officials said at the time.

When a federal disaster is declared, the committee is tasked with developing a plan that includes communication and coordination, community preparedness, donations management, case management, emotional and spiritual care, and temporary housing needs, among other tasks, McClellan said.

McClellan said 450 homes in the county were affected, with 280 in Taylor. She added one of the hardest parts of the job was helping families move their possessions out of their homes.

“Imagine losing every photograph from your family and having it all washed away and then to have your home torn apart,” McClellan said.

McClellan added all the work was done with volunteers.

The court voted to retire the project, relieving the committee members of their duties.

“I want to say to your committee on behalf of Williamson County, thank you,” County Judge Bill Gravell said. “Thank you for caring beyond what you had to.”