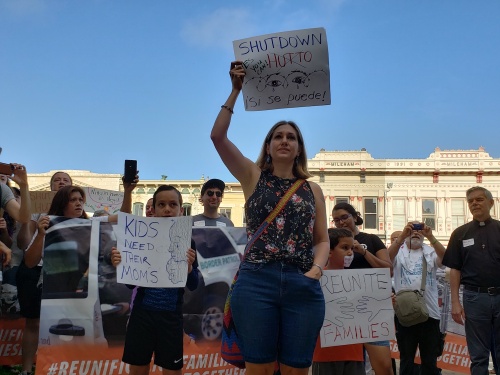 Valerie Milo (center) and sons Sammy, 9, and Ben, 6, join over 100 other people outside the Williamson County courthouse to encourage the court to end its contract with T. Don Hutto Detention Center and U.S. Immigration and Customs Enforcement effective Jan. 31, 2019.

Commissioners voted 4-1 to end the county's contract with the center, located at 1001 Welch Street, Taylor, that currently houses women detained—including some 35 moms who were separated from their children—by federal officials at the U.S. border.

The vote to terminate the contract does not mean the facility would be closed as the federal government or private owners can keep the center open, county officials said.

Precinct 3 Commissioner Valerie Covey voted against ending the contract. Covey sought to move a regular agenda item into an executive session but was voted down by other commissioners.

Precinct 1 Commissioner Terry Cook said during the commission's Tuesday meeting that while she would vote in favor of ending the contract, she was concerned with the fact that officials with the Williamson County Sheriff's Office would no longer be able to go onto the center's property during investigations. Cook said she was also concerned about what would happen to the women housed in the facility if the center does close, as the women would need to be moved to other already over-crowded centers.

"Let me be clear I've always believed that the women at T. Don Hutto should not be there. They are fleeing horrific living conditions," Cook said. "Our country needs immigrants. [But] if the court votes to terminate the contract no one should be celebrating or taking credit for this termination. This does not solve that larger immigration issue but it does allow us in the county to go back and focus on core county functions."

More than 150 people filled the courtroom holding signs after marching around the courthouse in downtown Georgetown in favor of canceling the contract.

Several of the marchers spoke during the citizens comment part of Tuesday's meeting and thanked the commissioners for their decision, including Austin's St. John Episcopal Church Rev. Matthew Seddon.