Environmental group calling for an end to harmful plastics, looking to Whataburger to initiate change 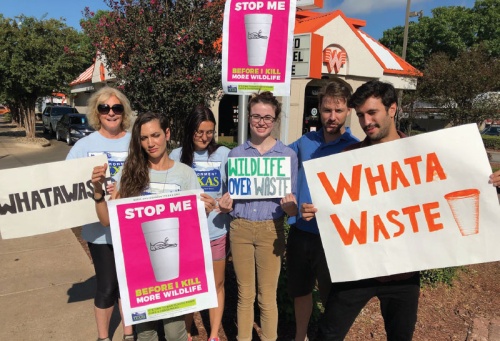 Environment Texas staff and volunteers stand outside a Whataburger in Austin. The group requested the company stop using styrofoam cups.

Environment Texas Research and Policy Center is asking Whataburger to stop using polystyrene, also known as Styrofoam, one of the most common types of plastic used worldwide.

In June, ThunderCloud Subs announced the business would phase out the use of Styrofoam cups by the end of the year after a petition launched by Environment Texas asked them to do so, and now the organization is turning its attention toward Texas staple Whataburger.

“So much plastic pollution has escaped into our environment that multiple giant masses of plastic are floating in the world’s oceans, including one plastic garbage patch twice the size of Texas in the north Pacific,” an Environment Texas press release said. “Concentrations of plastic debris are as high in the Gulf of Mexico as in the Pacific, and Texas beaches have more plastic trash than any other state.”

Styrofoam breaks apart easily but stays in the environment in small particles, said Luke Metzger, executive director of Environment Texas. Some forms of it take 500 years to decompose, and some of it never does.

Research presented at the Sixth International Marine Debris Conference this year showed Texas has more trash on its beaches than any other state in the nation, Metzger said in a letter he sent to Whataburger, and Texas beach clean-ups turn up tens of thousands of polystyrene cups each year.

“This waste costs our state significant amounts of money,” the letter said. “The state of Texas and its major cities spends at least $96 million annually to clean up litter.”

Environment Texas held an event in San Antonio outside the Whataburger headquarters because the company had not responded to a letter sent earlier, Metzger said.

“A representative came out and said they have heard from customers on this issue, but they have also heard customers want to make sure their drinks stay cold, and Styrofoam is good at doing that,” Metzger said.

He said the representative agreed to meet with him and discuss the issue further. This was in June, and since then Metzger followed up and requested a meeting but received no response.

“I’m not sure what happened, but in the meantime, we’ve launched the petition and received more than 50,000 signatures,” he said.

In terms of environmental initiatives, Whataburger takes a number of steps across the company related to sustainability, a representative from Whataburger Corporate Communications told Community Impact Newspaper. In addition to using biodegradable packaging, the company recycles cardboard and other materials in its restaurants. The representative said the company also works to reduce energy and water usage in restaurants through measures such as tinted window films to block out UV rays.