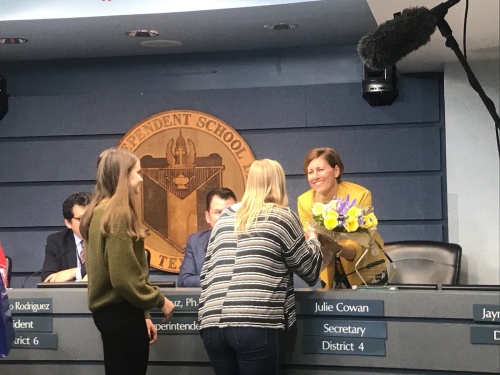 Board Secretary Julie Cowan, who elected not to file for her position in District 7, receives flowers from students at the Nov. 26 meeting.

District 1 trustee Edmond T. Gordon, who lost his seat in the Nov. 6 election, and board Secretary Julie Cowan, who chose not to refile for her position in District 4, both received plaques for their services and thanks from student representatives at the meeting.

Before stepping off the dais, Gordon said he would continue to address the district's racial inequalities as a member of the community. Although he was grateful for the gestures of gratitude at the meeting, he said he does not believe in “rewarding incomplete work.”

“AISD is a fine school district, one of the best in Texas, with great schools and overall rating that are the envy of other urban districts in the state,” Gordon said. “However, Austin has a problem. Despite thinking of itself as liberal, it is one of the worst communities in the country in regards to the upward mobility of poor children. Much of Austin’s problem in this regard is the result of racism’s impact on schooling, institutional, implicit and explicit.”

Cowan said although she knows the time is right to leave the district and spend more time with her family, leaving her AISD family will be bittersweet.

“Serving on the school board has been an honor, representing the students, school communities and taxpayers of District 4 has been a privilege,” she said. “For someone who likes to learn new things, meet new people and offer ideas and opinions with the hope of impact for the better one of the largest school districts in Texas, this position has been far beyond what I could imagine. I just hope I have done it justice.”

New trustees LaTisha Anderson of District 1 and Kristin Ashy of District 4 were sworn in at the meeting. Both thanked their community supporters and the trustees who served before them.

“It’s no secret I have very, very large shoes to fill, and you have always been thinking of all AISD students in all of your work here,” Ashy told Cowan at the meeting. “I’m looking forward to working with all of my fellow trustees to move the district forward.”