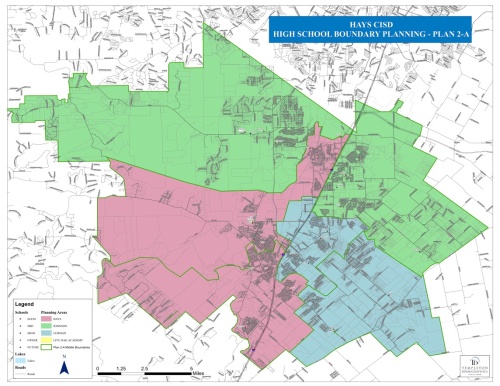 After months of committee meetings and public hearings, the Hays CISD board of trustees approved new high school attendance zones at its Nov. 26 meeting, voting in favor of Superintendent Eric Wright’s Plan 2A.

The attendance zones must be changed to accommodate Johnson High School, which will open for the 2019-20 school year.

Wright presented the map Nov. 12, adding it to the maps already under consideration as recommendations to the board by the rezoning committee: Plan 3 and Plan 6.

Wright said his map avoids the overcrowding at a few middle schools that drew some criticism of Plan 3 and makes fewer changes to the middle school attendance zones than either Plan 3 or Plan 6.

Plan 6 received the most votes at the final committee meeting, in part because it drew students from both the east and west sides of the district to each high school.

“People are very passionate about [Plan] 6 but I don’t see it’s that different,” trustee Vanessa Petrea said. “The overcrowding is a bigger concern of mine.”

The main criticism of Plan 2A in both public comment and from some trustees was that it leaves the three high schools with less socioeconomic diversity than either Plan 3 or Plan 6. Under Plan 2A, Lehman High School will start with 64.8 percent of students considered economically disadvantaged, compared to 39.1 percent at Hays High School and 37.9 percent at Johnson High.

“If we create a zoning map that concentrates poverty in one school, education suffers,” trustee Willie Tenorio said. “[Plan] 2A pushes too many middle income neighborhoods out of the Lehman feeder pattern.”

Trustee Esperanza Orosco said that as a former Hays CISD teacher she could not support transporting students longer distances in the name of socioeconomic diversity.

“Sometimes when we’re trying to do the right thing—or we think it’s the right thing—for low socioeconomic students,” Orosco said, “we totally lose sight of them as an individual.”

When he presented it to the board, Wright noted that his map gives Lehman High the lowest population of all the high schools for the next 10 years.

In addition to the map, the board adopted a caveat that was formulated by the committee in order to address socioeconomic balance.

The caveat was meant to indicate that the “committee recognizes the importance of supporting students who are economically disadvantaged” and asks that “the board and administration explore the development and implementation of special or magnet programs, or other mechanisms, that would foster success among students with economic disadvantages or promote socioeconomic diversity.” (Read the full caveat at hayscisd.net/rezone.)

The motion was approved with a 4-3 vote, with trustees Tenorio, Michael Sanchez and Teresa Tobias voting against Plan 2A and trustees Petrea, Orosco and Will McManus  as well as board president Meredith Keller voting in favor.

“I hear you all, I really do,” Keller said. “I understand what you’re saying, but we have some real capacity issues out of the gate with map 6 that I just can’t get around.”

The motion approved by the board includes a provision that any existing middle school student who is rezoned by Plan 2A can remain at his or her current school through the 8th grade.

Editor's note: this article has been updated to include additional comment.